We received a flurry of e mailed photos and videos from Buco over the weekend.
Here’s the first one from McKenzie Pass in Oregon.
As a former driver of the Waterfront Market 18-wheeler I’m sure Buco’s heart went out to this guy but as you can discern from the first sentence of his caption he was none too hopeful. 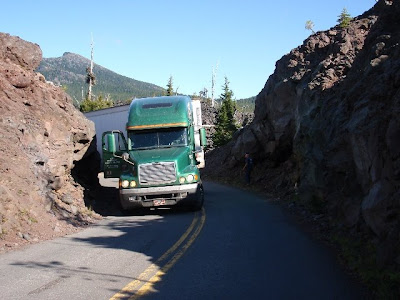 “This guy is screwed. He was trying to take a shortcut through McKenzie Pass east of Eugene and basically got wedged between the rocks. No vehicles over 35 feet allowed. His trailer alone was at least 55 feet and this was his first tight turn of so many. I don’t know the outcome. He couldn’t speak English.”

As soon as Will publishes Buco’s videos on Youtube I’ll embed them in our blog so we can all see them . What we really need is for Buco to duct-tape his video camera to his helmet and head down that Coast Highway. I’ll suggest it.