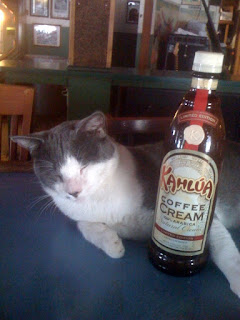 Monday Green Parrot Bingo to Benefit Frank the Cat
Green Parrot Bingo will host a special edition on Monday, September 19th to raise money to cover medical expenses incurred when our own Frank the Cat was injured in an unprovoked attack by another cat in front of his house last month.
Frank‘s injury, while no longer life-threatening still requires in-home health care and prescription medication.
To know Frank was to love hime. Many will remember Franks as the amiable, if aloof, bar cat at the parrot who would routinely hold court for tourists and locals alike. Frank‘s charm and animal magnetism was credited as one of the key reasons The Green Parrot was recently named the third best bar in American by Saloon historian Christine Sismondo.
Frank had recently moved to what he thought would be the quieter side of town but it apparantly that was not to be. So drop by on Monday night at 7, have a beer with Frank, play a little bingo and help a guy out.