Given the Green Parrot’s proximity to the Monroe County Courthouse, (diagonally across the street), the bar has always served as kind of either a pit-stop or a meeting place for those unfortunate enough to be headed that way.

Whether one was stopping in before court, (to bolster one’s courage) or after court, (to drown ones sorrows), or just to provide a respite from the tedium of jury duty, The Parrot always served as kind of a buffer, acting as a vestibule for the the officialdom across the street.
There was even an inside joke that went something like, “What do you call a Green Parrot patron wearing long pants and a shirt with a collar?”, followed by the punchline,: “The defendant”.
In fact, we used to keep a pair of men’s slacks in the liquor room for the poor guy who showed up for a quick snort before court obviously unaware of what constituted acceptable courtroom attire. Upon seeing such a person, and informing him, “you’re never gonna get in like that” the bartender-on-duty would go to the back room to fetch the one-size-fits-all Sansabelt Slacks for the now nearly despondant, soon-to-be-late patron. The trousers always came with the stern admonition, “but you gotta promise to bring these back”. Well one time they never did come back, but then again, neither did the guy so for all we know our slacks wound up doing a year and a day. 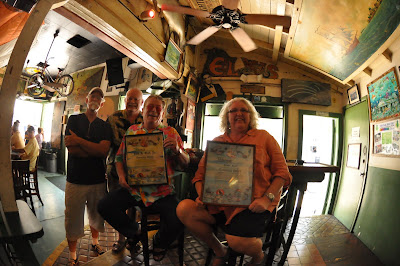 Vicki and John, shown here meeting at The Parrot with a few kindred spirits and displaying their certificates before their visit to The County Mayor’s office.

But I digress. Though today’s post does concern meeting at the Parrot before heading across the street, this is another sort of mission, one more of principal than penance.
One of the central characters in this story is our own Vicki Roush, our former bartender, talent-booker, chanteusse, webmaster and sometimes moral compass, in spite of the fact that The Green Parrot has always been Switzerland in affairs of state, local, national, or otherwise.
In today’s Keynoter the headline reads “Scott a Conch?, Then Count Us Out” and subtitled “Pair Returns Their Honorary Conch Certificates” and goes on to describe how Vicki and John Gish, a retired Monroe County Social worker marched into the office of Monroe County Mayor Heather Carruthers to do just as the headline stated after The Key West Citizen published a photo of Carruthers and State Representative Ron Saunders presenting a Honorary Conch Certificate to Gov. Rick Scott during the annual Florida Keys Day in Tallahassee.
Noting their displeasure with the new Governor’s stances on education, gay marriage, and business development, among other thing, Vicki and John said they did not want their Honorary Conch status if Scott also had it. Vicki said that after seeing Scott on the front page of the Citizen with his certificate, “it dawned on me that my cherished Conch Certificate was worthless”.
Vicki Rousch and John Gish return their honorary Conch certificates to Monroe County Mayor Heather Carruthers’ assistant, Carol Schreck, to protest Gov. Rick Scott receiving the honor.