When we first saw the video, and later learned the man in the video was not only a local but one of our good customers, I recalled having put a nice photo of him on the Green Parrot blog a few weeks earlier.
Not wanting to embarrass him any further by identifying him, I made the concious decision to not re-post the photo and further expose him (no pun intended).
. 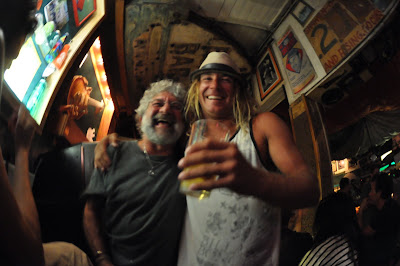 The Streaker, pictured above
Looking in the Sunday Citizen I see how wrong I was in thinking he sought anonymity
‘Running Bare’ ends losing ‘streak’
Key Wester makes waves for naked antics at Marlins game
“Hold my stuff. Watch this.”

Those were the last words a Key West boat captain uttered to his friends before jumping the outfield wall at a May 18 Florida Marlins game, shedding his clothes and streaking into baseball history.

The episode ended with a misdemeanor trespassing charge for Mike Tilson — and apparently ended the Chicago Cubs’ losing streak, making Tilson, 27, a dubious hero in the Windy City.

“The Cubs have nicknamed me ‘Running Bare,’ ” Tilson said Thursday. “I’m told the mayor of Chicago wants to give me a key to the city.”

Other national television appearances could be in the works, Tilson said, adding that Tosh.0 has been in touch with his father. 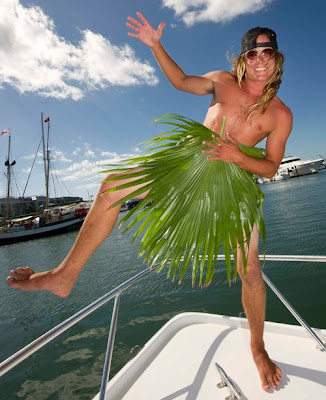 Tilson was at Sun Life Stadium in Miami Gardens with about 40 Key West friends who had chartered a bus for the Marlins game.

“I do feel badly about that — our whole group got thrown out of the game,” he said, recalling the events leading up to his newfound fame.

See the entire Key West Citizen article here
Here’s our boy, gazelle-like, on his recent outing to sample the American Pastime with some fellow Key Westers which could be more aptly titled “Take Them Off at The Ball Game” 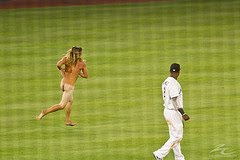