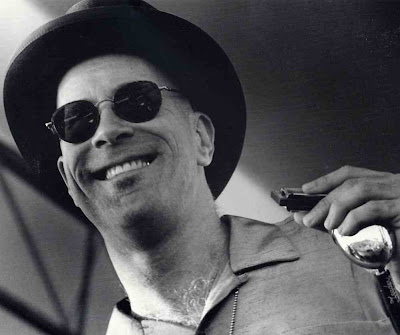 Mark Hummel, called by Blues Revue magazine “… a harmonica
virtuoso. Quite simply,… one of a handful of the best players ever
on the instrument…” brings his exciting new style of West Coast
Blues to The Green Parrot for two nights of jump blues and rock and
roll on Wednesday and
Thursday, May 16th and 17, beginning at 10 P.M.
The past decade has seen the emergence of young harmonica-led blues
bands. In California, groups that draw their inspiration from the
Chicago school but add elements of jump blues and rock ‘n’ roll into
the mix have come up with an exciting new style of West Coast blues.
In Oakland, the northern capital of California blues, resides the
incredibly powerful harmonica player and vocalist Mark Hummel, leader
of The Blues Survivors, who has crafted his own trademark harmonica
sound – a subtle combination of tone, phrasing and attack combined
with a strong sense of swing and has been a major force in shaping
and defining this musical genre.
Hummel’s constant touring and appearances at the major blues
festivals have firmly established his solid reputation around the US
and Europe.
West Coast Blues Revue magazine has said”… in just about everyone’s
estimation, Hummel is one of the top 3 to 5 living harp blowers”.
Get some mid-week culture this Wednesday and Thursday night at The
Green Parrot Bar,
your Southernmost Center for Culture, at the corner of Whitehead and
Southard Streets. For additional information call The Green Parrot at 294-6133.