For those of us who are not all caught in the fervor surrounding this year’s Jet’s winning season. here’s a look back at one of their not-so-great-moments. 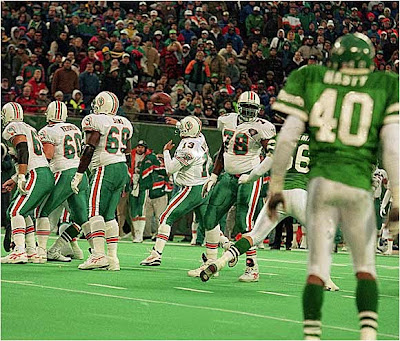 The Fake Spike Game was one of the worst games in the history of the New York Jets, one of football’s most snakebitten franchises:in the way they lost it, and for the effect it would have on the team, sending them into a nose dive that would last years. The date, November 27, 1994. The venue, the Meadowlands. The villain, Dan Marino and his evil Miami Dolphins.
The Jets never recovered from the trick play and lost their next four games that season as playoff aspirations shriveled. 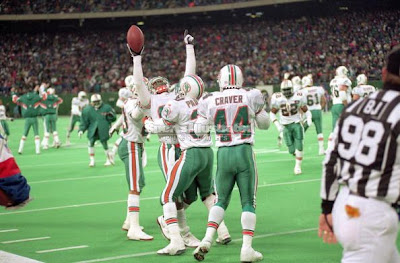 EAST RUTHERFORD, N.J., Nov. 27— There were no secrets today. The largest home crowd in Jets history knew what would be happening in those wild final minutes, and so did the Jets. Dan Marino would be winging that ball.

So tens of thousands of fans stood screaming at Giants Stadium, trying to outroar Dan Marino’s throaty commands to his Dolphins. The fans, the pass rush, it was all the same to Marino, as he stared at Mark Ingram and barked, “Clock! Clock! Clock!”

Ingram knew, but the rookie cornerback Aaron Glenn didn’t. Marino, the man with the golden arm, was about to fool the Jets. He made a spiking motion. For a second, Glenn bit and held up as the ball was snapped and Ingram headed for the right side of the end zone. Too late, Glenn chased Ingram.

By then, the ball was headed to Ingram, who grasped it for his fourth touchdown of the day, silencing the stadium and devastating the Jets with just 22 seconds to play. A game that the Jets had led by 17-0, and then by 24-6, had somehow turned into a 28-24 defeat. And instead of being 7-5 and tied for first place in the American Conference East, the Jets are 6-6 and again full of doubts.

For Marino, it was the 29th time he had helped engineer a Dolphins victory with his team trailing in the fourth quarter. Today, he connected on 15 of 18 passes in those final 15 minutes, amassing 164 yards and 2 touchdowns. The word “awesome” has been applied to lesser comebacks.

In that same span, Boomer Esiason was intercepted twice. And on a third possession in that crucial part of the game, Esiason was sacked twice and fumbled three straight times as the Jets’ offensive line caved in just when it needed to keep a drive going. The Jets recovered each of the fumbles but they were never able to regain control of the game.

For the Jets, whose history is filled with failure, this loss was one more painful blow.

“A staggering defeat,” said Coach Pete Carroll. “We should have put this game away so many times.”

But how many of these should-haves can the Jets take? This was their time, they had believed. They had won four of their last six games going into today’s contest to put themselves in position to draw even with Miami in the standings.

They had the crowd, which early in the game forced Marino to call a pair of timeouts. They had momentum. They had the lead, with Esiason swatting the Dolphins with left-handed spirals. For most of the day, it felt good to be a Jets fan.

But once Marino and his offense began to click, the Jets slowly began to fold. And now they find themselves back at .500 with a tough game next weekend on the road against New England.

“I guarantee you we’ll be back next week against the Patriots,” said a defiant Esiason. “This team will not collapse.”

For much of the game, Esiason painted pictures for the 75,606 fans. He connected twice with Johnny Mitchell for touchdowns after the erratic Mitchell had dropped the first ball of the game thrown to him.

He hooked up with Art Monk on a 69-yard pass play that led to the Jets’ second touchdown. He connected with Rob Moore — who later suffered a concussion — on 7 passes for 124 yards.

But all of the momentum changed when Marino started marching the Dolphins down the field one time after another.

Where were the Jets’ defenders? Where was Marcus Turner, the unheralded nickel back who had produced three interceptions against Warren Moon only seven days earlier? Where was the Jets’ pass rush, which had bothered Marino earlier in the game?

Actually, the Jets knew what they wanted to do. They just couldn’t do it. They couldn’t get any pressure on Marino in the second half, when he tossed all four of his scoring passes, and they certainly didn’t do much to stop him in the closing minutes, when he did his old, familiar comeback routine.

“Setbacks are temporary,” bravely stated Brian Washington, the Jets’ safety and one of the team leaders in generating turnovers. Washington had a fumble recovery and an interception today and those turnovers helped the Jets take the lead.

And they were still up, 24-14, early in the fourth quarter when Esiason tossed his first interception of the game right after he had scrambled for a first down.

Two minutes later, Marino and Ingram made it 24-21, with the quarterback connecting on five straight passes as he took the Dolphins downfield.

Still, the Jets were able to respond with a drive that seemed promising — until Esiason started getting hit.

He fumbled on first down, when hit by lineman Tim Bowens while trying to hand off. The Jets recovered 7 yards behind the line of scrimmage. On the next play, Bowens sacked him and Esiason fumbled again, with the ball once again recovered by the Jets, this time for an 8-yard loss. And on third down, he was sacked by Bryan Cox, fumbled again, and lost 9 yards as the Jets recovered one more time.

The Jets, though, got a break on the next play. This time it was the Dolphins who fumbled — on a punt return. James Thornton recovered for the Jets, who seemed ready to weather the storm with less than six minutes to go in the game and the ball on the Miami 38.

But the Jets handed the ball right back, with Esiason being picked off by J. B. Brown two plays later. The Jets’ defense actually stiffened, and the Dolphins punted. But the Jets couldn’t get a first down, and with 2:34 remaining, Miami got the ball back at its 16.

From there, it took 132 seconds for Marino to find Ingram in the end zone for the fourth time.

But it was Marino’s day.

“Marino is able to react as you mix things up,” said the Jets’ secondary coach, Ed Donatell. “He’s very good at countering. Our answer to him was to mix it — force him to make the decisions. And he made the decisions, all right.” EXTRA POINTS

ROB MOORE, who suffered a concussion in the fourth quarter, was hospitalized overnight at Lenox Hill Hospital for precautionary reasons. . . . ART MONK is one away from tying STEVE LARGENT’s N.F.L. record of 177 straight games with at least one reception. . . . In the first half, BOOMER ESIASON completed a fourth-and-goal-from-the-1 pass to JAMES THORNTON, who slipped before he could get across the goal line. On the final play of the game, Esiason threw a desperation pass from the Miami 35 but it sailed 10 yards behind the end zone. . . . The Dolphins had lost 10 of their previous 11 coin tosses, but won this one. Their other winning toss? Against the Jets. . . . The Jets’ previous in-house attendance record at home was, not surprisingly, for a Giants game 10 years ago when 74,975 attended.

The Jets, though, got a break on the next play. This time it was the Dolphins who fumbled — on a punt return. James Thornton recovered for the Jets, who seemed ready to weather the storm with less than six minutes to go in the game and the ball on the Miami 38.

But the Jets handed the ball right back, with Esiason being picked off by J. B. Brown two plays later. The Jets’ defense actually stiffened, and the Dolphins punted. But the Jets couldn’t get a first down, and with 2:34 remaining, Miami got the ball back at its 16.

From there, it took 132 seconds for Marino to find Ingram in the end zone for the fourth time.

But it was Marino’s day.