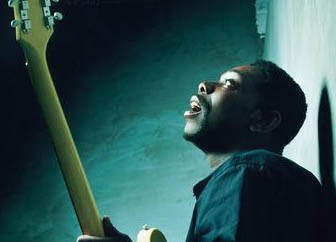 Blues Legends James and Lucky Peterson at The Green Parrot

One of the preeminent blues performers of the modern era, Lucky
Peterson, will appear at The Green Parrot with his special guest, his
father, James Peterson, on Wednesday, January 10th at 10 P.M.
A searing lead guitarist, fantastic organist, and first-rate vocalist,
no one would refute his reputation as one of the most dangerous triple
threats working in the blues today.
Rich in roots but performing in the present, Lucky’s many talents are
truly mind-boggling. “I learned soul when I started playing with
Little Milton, and then I worked with Bobby Blue Bland, who showed me
another type of soul.” Though his music is infused with Lucky’s own
special brand of “soul,” he by no means has he left the blues behind.
But that’s just what one would expect from an artist with Peterson’s
resumé; the singer/guitarist/organist was certainly well-groomed.
Lucky’s father is bluesman James Peterson, a blues singer and owner
of the Governor’s Inn, a northern version of a Deep South “chitlin’
circuit” roadhouse club. Artists like Buddy Guy, Junior Wells, Muddy
Waters and Koko Taylor played there regularly. Virtually growing up on
stage, little Lucky began playing almost before he began talking.
Lucky played his first gig at age three and his first record (at age
5!) was produced by none other than the legendary Willie Dixon.
A child prodigy who appeared on The Tonight Show with Johnny Carson,
The Ed Sullivan Show, even What’s My Line? he has since matured into a
true blues veteran who has performed with Etta James, Otis Rush, B.B.
King and Albert Collins. Over the last three decades, Lucky has
played to audiences all over the world, dazzling both fans and critics
with his multi-instrumental talents (he plays keyboards, guitar, bass,
drums and trumpet), his soulful vocal style and his youthful approach
to the blues.
Chicago’s Reader raved, “His musicianship is unassailable…a
combination of sleek-handed dexterity and imagination…a happy marriage
of blues authenticity and foot-pleasing danceability.
The Green Parrot Bar is your Southernmost Center for Culture at
the corner of Whitehead and Southard Streets. For additional
information call The Green Parrot at 294-6133.