Hot on the heels of Fodor’s uncluttered, white-bread, but broadly positive description of the “sometimes rowdy” Parrot comes another publication with their distinctly different, edgier, yet almost whimsical take on us.
It’s The Lonely Planet Guide wherein we’re branded as a “rogue cantina” (I like that) and then for good measure they throw in clouds of smoke, howling blues bands, inked-up city attorneys, termite shit and “a most entertaining urinal talk piece”???

“The oldest bar on an island of bars, this rogue’s cantina opened in the late 19th century and hasn’t closed yet. The owner tells you the parachute on the ceiling is ‘weighed down with termite turds,’ while a blues band howls through clouds of smoke. Defunct business signs and local artwork litter the walls and, yes, that’s the city attorney showing off her new tattoo at the pool table.

Men: check out the Hieronymus Bosch-like painting ‘Proverbidioms’ in the restroom, surely the most entertaining urinal talk piece on the island.” 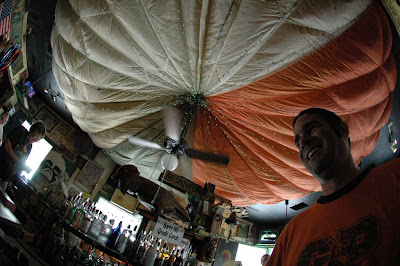 Here’s our Kenny, unwittingly standing in a most perilous position under what could potentially be a metric ton of termite droppings.