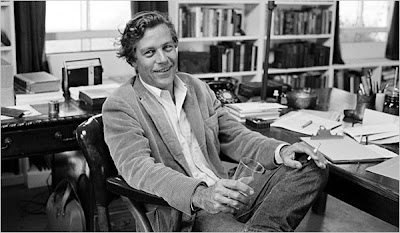 L. Rust Hills at his home office in Connecticut in 1973.

Rust and his wife Joy lived next door to us for a time and were occasional patrons of the Green Parrot, dropping in to listen in to the Poetry Slams we liked to feature a few years back. Both immensely gifted people and good neighbors, I remember now the times, chatting casually across the fence with Rust about everyday bullshit, and, then, as I walked back across the yard to my house and recalled Rust’s background, would get goosebumps thinking about this man’s role shaping the canon of modern American literature.
Reproduced here is Rust’s New York Times August 13th obituary which paints a picture of what a lofty and special place that was.

L. Rust Hills, a staunch advocate of contemporary American literature who, as Esquire’s curmudgeonly fiction editor in three separate stints from the 1950s through the 1990s, published original works by scores of the country’s finest writers, died on Tuesday in Belfast, Me. He was 83 and lived in Key West, Fla.

The cause was cardiac arrest, said a friend, the writer Christopher Buckley.

A shrewd reader with a keen ear for an original voice and a sure sense of the distinction between new writing and merely fashionable writing, Mr. Hills upheld standards he unashamedly thought of as literary. The list of distinguished writers he championed early in and throughout their careers is long and comprises several generations. To name just a handful: Norman Mailer, John Cheever, William Styron, Bruce Jay Friedman, William Gaddis, James Salter, Don DeLillo, Ann Beattie, Richard Ford, Raymond Carver and E. Annie Proulx.

He was especially deft at taking excerpts from novels — Styron’s “Sophie’s Choice” is an example — and editing them so they came to seem like short stories, complete experiences for a reader.

“He used to say that excerpting was the true editor’s art,” Mr. Ford said in a telephone interview on Wednesday, adding that Mr. Hills “published the first really decent short story I ever wrote, ‘Rock Springs,’ in 1981.”

Mr. Ford added: “He had a wide idea of what good fiction was, and when I got involved with him, it seemed like a huge stroke of good luck.”

In another interview, Ms. Beattie said: “He was a meticulous editor, and that kind of exacting close-in line editing is something writers always value. And he was great at titles. He gave me the title for one story, ‘What Was Mine,’ that became the title of a collection.”

Lawrence Rust Hills — Dorothy Parker once remarked to him that his name made her forget all the other New Jersey suburbs — was born on Nov. 9, 1924. He grew up in Brooklyn, the son of a salesman for Sears, and attended the Kings Point Merchant Marine Academy, served in the merchant marines during World War II and graduated from Kenyon College in Ohio.

It was not the background that one would have expected from the aging-preppie-like appearance he affected as an adult. With a brilliant smile and the early facial creases of happy dissipation, he was known for being cranky, curious, passive-aggressive and, most of all, persnickety. In the 1970s he wrote three books of personal essays, which came to be known as “the fussy-man trilogy.” Their titles (and subtitles) suggested their flavor: “How to Do Things Right: The Revelations of a Fussy Man”; “How to Retire at 41, or Dropping Out of the Rat Race Without Going Down the Drain”; and “How to Be Good, or the Somewhat Tricky Business of Attaining Moral Virtue in a Society That’s Not Just Corrupt But Corrupting, Without Being Completely Out-of-It.” His other books include a writing manual, “Writing in General and the Short Story in Particular,” often used in college creative-writing classes, and several anthologies he edited, including the mammoth “How We Live: Contemporary Life in Contemporary Fiction,” compiled with his former wife Penney Chapin Hills.

When he was first hired at Esquire, in 1957, the magazine’s fiction had turned away from its original lofty aspirations; once the home of Hemingway and Fitzgerald, by the late 1950s it had shifted more toward adventure stories for adventure’s sake. Mr. Hills set about making the fiction serious again, soliciting stories like “Nude Croquet” by Leslie Fiedler, a famously poisonous depiction of New York intellectuals, and Arthur Miller’s decline-of-the-old-West parable, “The Misfits.”

In the 1960s Esquire was perhaps the nation’s most vibrant magazine — sexy, mischievous, irreverent and hip — and Mr. Hills’s idea of fiction, as well as of the literary life, fit into the ethos of the magazine perfectly. When he left in 1964 to go to The Saturday Evening Post, Norman Mailer’s novel “An American Dream” was being serialized in Esquire, bringing a forthright sexuality into the magazine for the first time. In 1963 Mr. Hills conceived an entire literary issue of the magazine, which included stories, but also interviews with writers; a photo essay on writers’ lives; a snarky profile by Gay Talese of the circle surrounding George Plimpton’s Paris Review; and most controversially, an illustrated diagram of “The Structure of the American Literary Establishment,” identifying writers, agents, publishers, reviewers and events that Mr. Hills determined to be at and around the “red-hot center” of American literary life. The issue and especially the map angered many who felt they ought to have been included and many who were, but entertained just about everybody else.

Mr. Hills was attacked by, among others, the writer Mark Harris, in a letter to The New York Times Book Review, and he responded with a letter of his own, a statement of his philosophy:

“The whole literary establishment — if there is one — is geared to find new writers, and the establishment’s most powerful members are those who have the taste and energy and connections to find the most of them. No need to ‘pity the poor young writer’ — if he’s any good, he’ll be famous before he ought to be. It’s hard to tell him this, though; it’s easier to encourage him with platitudes.”

“It was and is clear he was one of the great stewards of magazine fiction,” David Granger, the current Esquire editor in chief, said in an e-mail message.

Two of Mr. Hills’s marriages ended in divorce. He is survived by his wife, the writer Joy Williams of Key West and Tucson, Ariz.; a daughter, Caitlin Hills of Washington; and a grandson.

For the last several years he had been in poor health. But he kept up his literary habit.