Since we’re on the subject of waterspouts here’s a reprise of an earlier post that features a waterspout photo I took in the early ’70’s. 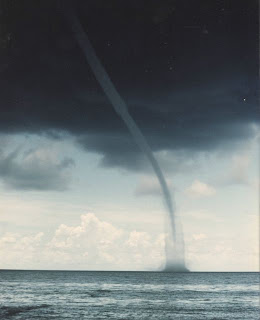 I spotted this waterspout from the second floor balcony of my United Street apartment. I bolted down the stairs and ran the two blocks down Duval Street to the concrete pier at South Beach and got lucky.
I say lucky because the whole thing only lasted a few minutes before that undulating funnel cloud, an image worthy of Cecil B. DeMille’s Ten Commandments, dissolved, and lucky because I only had two high speed ektachrome transparencies frames left on my Minolta SRT 101. (That info should pretty well date this photo).