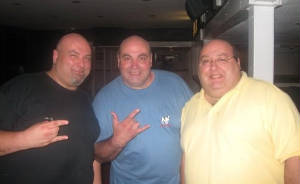 Since around 1985, The Juliano Brothers, this Philadelphia-based  “Swiss Army Knife of Music” has been known to play not only music to party by, but the music you hear or wish you still heard on the radio. Many times we hear our fans say things like “We have never heard a band cover that song” or “Its been years since we have heard that song, that’s a great one”. Whether it be Rock, Blues, R&B, Metal, Alternative, Country, Funk, or Disco, “if you wanna hear it, we will play it!! Our shows are all about you, not us”.
With Mike on Drums and Vocals, Matt on Guitar, Guitar Synth, and Vocals, and Greg on Bass and Vocals, they generate music the only way brothers can.