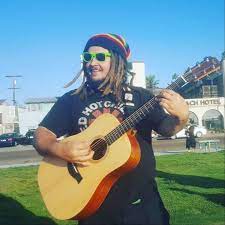 Born and raised Sacramento California Reggae musician Louis Bryant (Reggae Lou) started a solo looping traveling act and toured the country coast to coast from 2013 until 2016 when he then put together a group of musicians to join in the project. Together the band toured the entire country in 2016 performing from Standing Rock ND (which was a true life changing journey) to San Diego to Rosarito Mexico to Miami, and as many big cities as possible in between. Also as far up northeast as Gloucester Mass! Reggae Lou and The Kind Budz have Performed with many reggae musicians and bands from around the world along the way: Badfish, Tropidelic, Bumpin Uglies, Earthkry, Passafire, Mike Love, Cas Haley, The Stranger Band, Indyca, Sowflo, Spred The Dub, Bachaco, Funk & Gonzo Josh Heinrichs, and many more. The name Reggae Lou was created by a fanbase in Pensacola they continually called him that until that became his stage name. Now based out of Key West Florida and accepted throughout the country after extensive touring from coast to coast spreading good vibes.