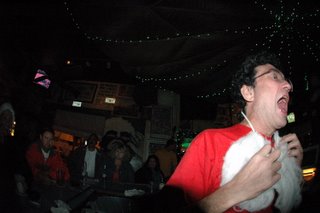 That’s how Pat started out his call to me from NOLA last night. I reassured him that no, of course I wouldn’t hang up on him but he must have sensed something as the the phone in my hand had in fact begun an immediate downward arc toward the cradle as soon as I heard that gravely voice on the other end.
The call was a surpisingly lucid one for Pat, even for a call from across town, let alone his third day at Jazzfest.
After reassuing me of his solvency and saying he hadn’t lost his credit cards or stepped on his glasses he proceeded to tell about what he’s been up to and with whom.
I feel like I need to use boldface, like on “Page Six” or something to give proper emphasis to the kind of folks he’s been hangin’ with.
Pat continued, “…went to the Olde Pointe Bar across the river in Algiers last night with MARK MULLINS from BONERAMA, TROMBONE SHORTY, and BIG SAM from BIG SAM”S FUNKY NATION. Did not leave till 7 A.M. and since the ferry had long since stopped running had to walk the mile or so across the bridge, in that neighborhood, a dicey deal .
Also ran into PAUL CEBAR unloading at the fairgrounds, says he has open dates in June and would love to play the Parrot.
Saw PAPA MALI, ERIC LINDELL too and they also give their best. Old friend WAYNE KRAMER also says hi and wishes he could visit”
Pat had to go since he was off with a date to The Los Lobos show but he assured me he has been representing the Parrot well and in his words was being “quite the diplomat”.
The photo above is a stock Patrick photo but could well be the face our little diplomat is sporting in New Orleans this week.