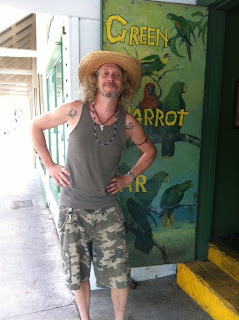 I put a post up on Facebook today to inform our patrons that we would be closed tomorrow and to urge them to stay safe.
I included a photo of myself and Jimbo Mathus, and mentioned  that he would be shortening his weekend here due to Isaac.
As an aside I said it had been a great day of music and that he would be back.
What I, in my haste, left out was to say was that it was one hell of a day of music, three scorching sets that combined blistering rock and roll, gut-bucket juke joint delta blues, barroom-weepers that would have George Jones reaching for a Kleenex, Tex Mex two-steppers, and a version of “Who Do You Love” that had not been heard in Key West since George Thorogood duck-walked on top of the bar at Fitzgerald’s.
Soundcheck was a jaw-dropping medley that caused one of our more astute music fans to lean over and mention in an obvious reference to the impending weather, “This is the perfect band for this weekend, like a Cadillac driving off a cliff”.

Add to this that on Thursday these guys drove 12 hours from Clarksdale, Mississippi to Bradfordsville, Florida, outside of Tallahassee, played their gig there till 2 am and by 5 am were on the road to Key west for the Parrot. They arrived at The Parrot a half-hour late due to what Jimbo said was the weather, the traffic, a breakdown and “the wreck” (not theirs). Even so, as one patron who watched them pull up out front told me, It took just under thirty minutes from the minute they stepped out from the van, to loaded in, set up, do their soundcheck, and strike their first chord. (This guy was timing them,  a typical Parrot patron, gotta love it).

So here’s a band that’s been driving twenty-four out of 36 hours and then they do 3 90-minute pelvis-grinding, barn-burning sets and do not spare the horses. playing everything as Jimbo puts it. “from Jimmy Rodgers to Jimi Hendrix.”
And what a band 2 guitars, keyboard, bass and drums that knew exactly what their music was supposed to sound like. Were they loud? Well, yea. But did it hurt, well, no.

I complimented Jimbo on his band after the first set and he said it had been six years since he had been to the Parrot and this band was the result of his six years of culling the best guys he could find from Mississippi, Tennessee, Arkansas and God knows where else.
He’s dying to get back to the Parrot and make up for this lost time and as soon as we can book him we will. He’s a great talent and a great guy.

To learn a bit more about Jimbo Mathus here’s the press we put out on him last week:

Jimbo Mathus’ Tri-State Coalition: A Modern Case of Classic Blues
KEY WEST, Fla. (August 20, 2012) — Blues guitarist/vocalist James “Jimbo” Mathus brings his latest incarnation, Jimbo Mathus’ Tri-State Coalition, to The Green Parrot for a full weekend of gut-bucket North Mississippi Juke Joint Blues, with shows at 5:30 and 10 p.m. on Friday, August 24; 10 p.m. on Saturday, August 25; and 5:30 p.m. on Sunday, August 26.
If you’ve only known Jimbo Mathus for his work as the founder of The Squirrel Nut Zippers and their hyper-ragtime, early jazz and blues, you’re missing his best work. In place of the Zippers’ tight swing and hot jazz is a loose, woozy houseful of southern sounds that ricochets from swamp blues to hip-swerving soul; from honky-tonk weepers to rollicking, almost Allman Brothers-esque rockers.
In what may be called a modern case of classic blues, Mathus, a devoted fan of Jimmy Rodgers and Charlie Patton, takes the raw power of vintage delta sounds and gives it a completely contemporary and fresh lyrical direction and sensibility. To this sensibility to blues, add Mathus’ prowess as a musician.
Mathus played second guitar on Buddy Guy’s Sweet Tea album and the Grammy Award winning Blues Singer and subsequent national tour. He was then hired for a stint on Guy’s famed “Double Trouble” tour.
Tri-State Coalition, drawing on gospel, R&B, and juke joint blues, brings to the stage a primal groove with feral lyrics. Mathus promises a “ritualistic workout that keeps the booty moving.”
He recently reteamed with Luther Dickinson and Alvin Youngblood Hart to create the South Memphis String Band, whose first release, Home Sweet Home, is nominated for a Blues Music Award (formerly known as the Handy Awards). He also collaborated with Luther Dickinson and The Sons of Mudboy on Onward & Upward (2009), Grammy Awards nominated for Best Folk Performance in 2011; the album was the recipient of high praise from Rolling Stone magazine

Jimbo Mathus is a rising-star powerhouse that feeds the soul. His latest band, The Tri-State Coalition, features solid talent cut from the same Delta cloth. Mathus describes Tri-State’s sound as “…a true Southern amalgam of blues, white country, soul and rock‐n roll. As Dickinson would say, ‘If you don’t like this, there is seriously something wrong with you’.”