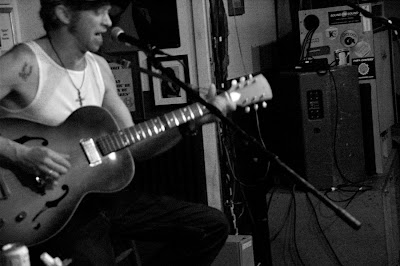 A remarkable evening of music. Jimbo and Olga walk onstage with two acoustic guitars,some incredibly inspired vocals, and an occasional harmonica or kazoo and knock everyone out.
From the first song, a bit of Country Blues by way of Furry Lewis’ Kassie Jones to some Delta Blues with Robert Johnson’s Phonograph Blues, to Olga’s Torch Songs to Jimbo’s “A Town without Shame” from Samuel L. Jackson’s recent film “Black Snake Moan” and finishing some three hours later (I’m leaving a LOT out) with “I Heard The Voice of a Pork Chop” where Jimbo declares he’s “hungry as a BEA-UH!” which is perfect because Sauce Boss Bill Wharton shows up on stage in his whites, complete with chef’s toque, to offer Jimbo a steaming bowl of Gumbo fresh from his show at the burger joint around the corner. You have two more chances to catch this exeptional duo on this go-around. Tomorrow at the 5:30 “soundcheck” or tomorrow night at 10 PM. 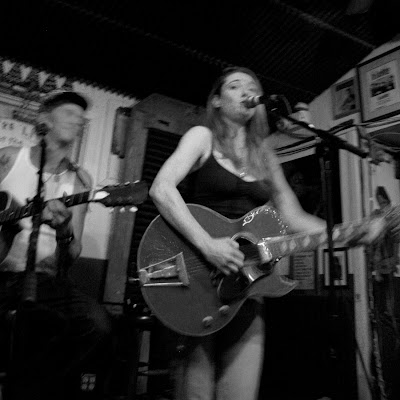 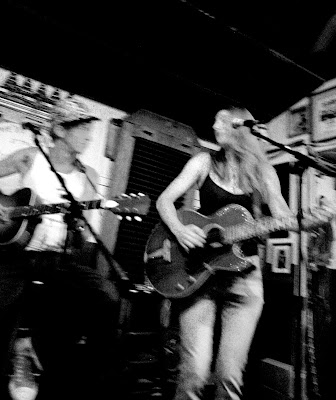 Here’s the Press on them:

Olga and Jimbo Mathus Bring a Modern Case of Classic Blues to Parrot.

Blues Music’s First Couple, Olga and Jim “Jimbo” Mathus will appear at
The Green Parrot on Tuesday and Wednesday, November 13th and 14th
beginning at 10 P.M. with a special 5:30 P.M. “soundcheck on
Wednesday.
Olga is a soulful, blues performer from the Deep South and is among
the vanguard of new blues artists combining innovation with a deep
sense of roots. She happens to be married to Jimbo, a talented artist
who was the former frontman, writer and founder of the legendary band
Squirrel Nut Zippers.
If you’ve only known Jimbo Mathus for his work as the founder of
The Squirrel Nut Zippers and their ragtime, early jazz and blues
you’re missing his best work.
In place of the Zippers tight swing
and hot jazz is a loose, woozy houseful of southern sounds that
ricochet from swamp blues to hip-swerving soul; from honky-tonk
weepers to rollicking, almost Allman Brothers-esque rockers.
Olga now calls Memphis and New Orleans homes. In addition to her
extensive gigs producing local and nationally syndicated radio shows,
she participated in Martin Scorceses documentary on the blues with
Jessie Mae, North Mississippi Allstars, T Model Ford, Otha Turner,
Corey Harris and John Spencer Blues Explosion. She’s shared the stage
in recent years with Coco Robicheaux, Robert Randolph, DJ Logic, Chris
Isaak, Papa Mali, North Mississippi Allstars, Jimbo Mathus Knockdown
Society, Los Lobos, Michael Franti & Spearhead, Jim Dickinson, Johnny
Neel (Allman Brothers), and Matt Abts (Govt Mule).
Jimbo and Olga Mathus take the raw power
of vintage delta sounds and gives it a completely contemporary and
fresh lyrical direction and sensibility.To this sensibility to blues
add Mathus’ prowess as a musician and Olga’s hypnotic guitar work and
sexy alto singing and you have what may be called a modern case of
classic blues.
The Green Parrot Bar is your Southernmost Center for Culture at the
corner of Whitehead and Southard Streets.
For additional information call The Green Parrot at 294-613