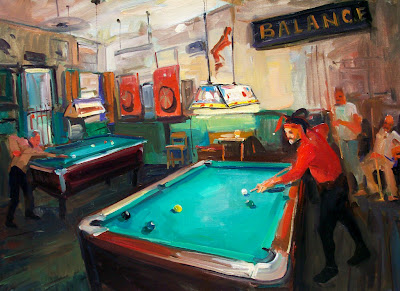 This oil painting by James Kerr was offered to me some time ago by the Gallery on Greene and though I loved it and coveted it, for many reasons it was not meant to be.
I like the jesters hat.
Check out the link to James Kerr above to see how The Green Parrot fits in with the artist’s oeuvre. Tasty stuff.

Here’s a short bio of the artist.

James Kerr was born in Buffalo, New York in Kerr’s mother quickly recognized that they had a prodigy on their hands. By age 6 he was apprenticed to the city’s most prominent portrait artist. The late Lazlo Szabo. By 16 when Szabo passed his class of 24 elected him the instructor to the rooster of students. He also specialized in landscape with Carl llig.

Mr. Kerr’s approach to oil painting is direct and colorist. He has distilled his subject and palette into an exquisitely vibrating field of strokes, with a harmonious balance of tone and hue. Inspiration for much of his work is derived from scenic locations in New England, Florida, and the Caribbean and in North Carolina, from the mountains to the coast. It is in his portraiture that Kerr’s ability to capture engaging expressions that draw us in is manifest.

Responding to the vibrant colors of nature, Mr. Kerr has developed a high key palette. Conversely, he is also influenced by the somber tones of the New Orleans night life and jazz musicians.

Exhibiting for over 25 years, James has had more than 20 one-man shows throughout the United States. Collectors have sought James Kerr’s oils since 1966. His paintings are represented in hundreds of private and corporate collections, including the Wachovia Bank and Trust, RJR Nabisco, the Glaxo Corporation, and NationsBank.