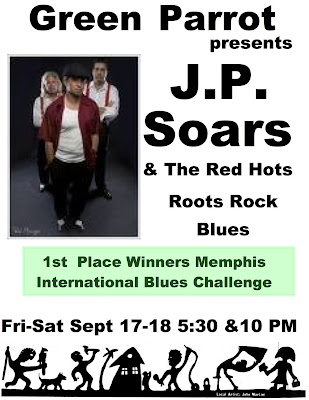 International Blues Challenge First Place winners J.P. Soars and The Red Hots will appear at The Green Parrot Friday and Saturday, September 17th and 18th with shows at 5:30 and 10 P.M.
J.P. SOARS & THE RED HOTS took the Blues world by storm by winning the most coveted 2009 International Blues Challenge (IBC).
With the mission to find the best-unsigned blues band, this annual competition is held worldwide on a regional level by The Blues Foundation’s 150 Affiliated Organizations around the world. A record number of 164 bands and solo/duo acts from Blues societies around the world took the stages of Memphis’ legendary Beale Street on Thursday and Friday to compete for over $20,000 in cash and prizes, before notable Blues industry judges in hopes of making the finals on Saturday, drawing an audience of many thousands to Beale Street in downtown Memphis.
When the dust cleared J.P. Soars & the Red Hots (CHRIS PEET on drums and GARY RIMMINGTON on bass) sponsored by and representing the South Florida Blues Society took first place and the title BEST UNSIGNED BLUES ACT IN THE WORLD!
J.P. Soars also individually won the Albert King Award, which establishes him as the best guitar player in the competition this year.
Catch this ultra-dynamic group this weekend at The Green Parrot Bar, your Southernmost Center for Culture, at the corner of Whitehead and Southard Streets