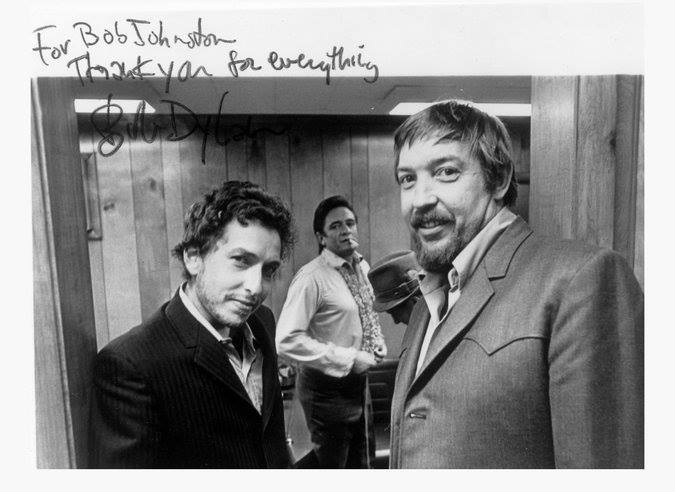 “Is it Rolling Bob?”,
A few wonderful obits for legendary record producer Bob Johnston .
On the intro to the track “To Be Alone With You”, on Dylan’s 1969 Nashville Skyline album, Dylan asks, “Is it rolling Bob?” The Bob in question was Bob Johnston and the answer is yes, it was rolling.

“As a staff producer for Columbia Records (and then as a free agent) Bob Johnston was a guiding force behind the artists on his watch — playing priest and lifeguard, counselor and agitator to such standard-bearers and upstarts as Johnny Cash, Marty Robbins, Leonard Cohen, Simon and Garfunkel, and The Byrds, to name a few http://www.npr.org/…/is-it-rolling-bob-remembering-producer… Also good Rolling Stone obit here: http://www.rollingstone.com/…/bob-johnston-bob-dylan-produc…

Some great anecdotes:
When Columbia was reluctant to record a live album in a prison, it was Johnston who “… picked up the phone and called Folsom, got through to the warden, told him, ‘Warden, my name’s Bob Johnston. Johnny Cash is gonna come up there, do an album, and give a fuckin’ concert.’ He said, ‘My God, when?’

and “Dylan played a little song, and I said, ‘That sounds like the Salvation Army band.’ He said, ‘Can we get one?’ I said, “No, it’s two o’clock in the morning!’ I got a trombone player and a trumpet, put a drum around a guy’s neck. Everybody marched out there and sang ‘Rainy Day Women,’