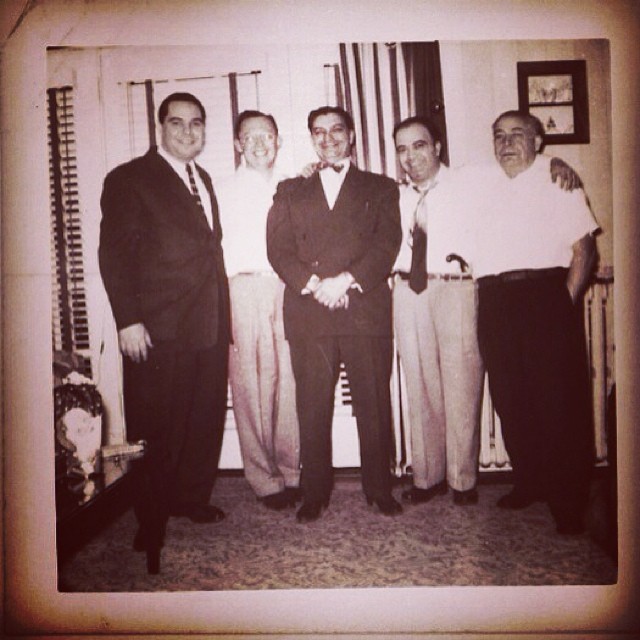 @greenparrot
On this Father’s Day I’d like to taken a moment to honor not only my father, God bless his gentle soul, but some of the the other men in our family who influenced me, each in their own special way.
Sadly all of the men in this photo are now gone, a few of them way too soon.

On the far right is my maternal grandfather, John Cardona, On the far left in the photo is his son, also John, In the center of the picture, with the bow tie and pencil-thin moustache, is my maternal grandmother’s brother, my great uncle, Carmen Donato. On his right is my uncle Dick, And that leaves Al, my father.I don’t know what to say about him that would really do him justice. As I said earlier, he was the gentlest of souls. He was soft-spoken, patient, loving, and never-comlaining, all this in spite of the fact, or perhaps because of the fact that he had a childhood that is difficult for me to even imagine, His father died when he was just 3, in the Spanish Flu pandemic in 1917. There was no social safety net for anyone in those days, let alone newly arrived immigrants, except the meager help that other newly-arrived family members or paisans could provide , or what little charity the catholic church could offer to his young widow and her five children. Because his mother could not support them all Al was sent to a Catholic orphanage in West Philadelphia till he was 13. Years later when I was in college I volunteered to help chaperone field trips for kids in a local orphanage and when I told Al, he cried.

You would think that the residue of his childhood like his would be bitterness or contempt but instead he emerged to become a man with a deep well of humility, optimism and grace. As my brother once said of him, “It’s as if the guy never had a bad day in his life”.