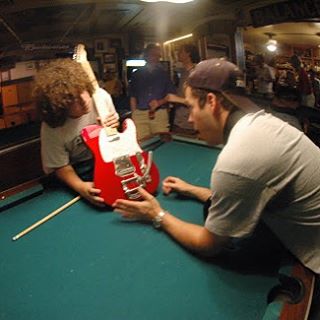 @greenparrot
Back in 2007, my son Dan was into guitars, specifically building guitars. With parts gathered from many sources on eBay, he built a candy-apple red Muddy Waters Telecaster, working mostly on the kitchen table. Albert Castiglia and Dan were friends, so when Dan told Albert about the home-made Tele, Albert demanded to see it, then asked to play it. He must have liked it, so much so that he played the whole 90 minute soundcheck with it.That’s Dan (with the Buddy Miles fro) and Albert checking out one of the custom features, namely the chrome Gretch Bigsby whammy bar, after soundcheck. That’s my older son Nick, on the right behind the pool table talking to Richard Talmedge from The Restaurant Store. Albert’s here the rest of the weekend including Sunday soundcheck.#greenparrotbar #greenparrotsoundcheck #albertcastiglia #muddywaters #muddywaterstele #fenderguitars #telecaster #bigsby #savefamilyphotos