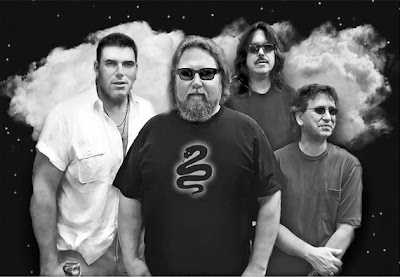 Graham Wood Drout returns to the Parrot stage with his
legendary south florida swamp-blues band IKOIKO for two big nights on
Friday and Saturday August 3rd and 4th beginning at 10 P.M. plus
special 5:30 P.M. “soundcheck” on Friday and Saturday
afternoon.
A genuine underground phenomona, Drout writes songs
incorporating an eclectic mix of southern musical traditions, Gulf
Coast Americana, Mardi Gras and blues. Labeled by Blues Review
magazine one of America’s best kept secrets Graham Wood Drout is none
the less a Miami legend that has worked with a literal “who’s who” of
Rock, Blues and Country music.
Highlighting a more than 25 year career, Graham Wood Drout’s band,
Iko-Iko, has presented performances in the films “Cape Fear,”
“Contact” and AAA/Blues/Alt
Country radio favorites, “(I’ve Got) Gris-Gris,” “Bag Me, Tag Me, Take
Me Away” and now, “Big Toe” and “The Ghosts of Mississippi” that is
being covered by a wide range of artists as well.
Drout has received the awards for “Best Blues Band” and “Songwriter
of The Year” from New Times Magazine, a Jammy Award for “Best Blues
Band,” and his music was
described by Blues Revue Magazine as “Soul filling ideas that flow out
of Drout’s pen and into the heart of the listener…the result is
breathtaking.”
Don’t miss this opportunity to catch one of South Florida’s
hottest bands, IKOIKO, fronted by one of Florida’s most creative,
provocative and entertaining performers as they blow the
roof off this legendary watering hole this weekend.
The Green Parrot Bar is your Southernmost Center for Mojo Culture at the
corner of Whitehead and Southard Streets.
For additional information call The Green Parrot at 294-6133.