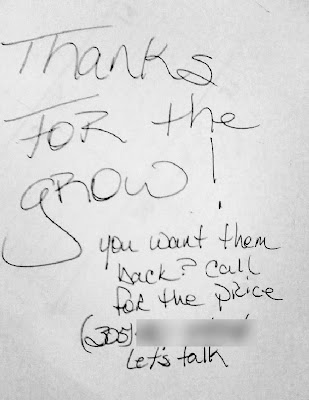 Marathon – Monroe County Sheriff’s Office Special Investigations detectives employed an unusual tactic to arrest a suspect who was growing marijuana. They left a note in place of the plants asking him to call; in return for cash they offered him his plants back.

“Thanks for the grow! You want them back? Call for the price…we’ll talk,” the note read, with a phone number.

The plants were found after a tip from a citizen that marijuana plants were growing on a wooded lot off of Coco Plum Drive in Marathon. When detectives arrived, they found six large plants and confiscated them as evidence, leaving the note in their place. About ten minutes later, 48 year old Steven Alan Locasio called the number asking what he would have to do to get the plants back. He offered $200 for the safe return of the plants, which detectives agreed to.

They loaded up the plants and met Locasio at the corner of Coco Plum Drive and Avenue H. He handed over the cash and he was arrested in return.

Steven Locasio and his wife, 50 year old Christine Locasio, were both charged with cultivation of marijuana, possession of drug paraphernalia and sale of marijuana. They were booked into jail.