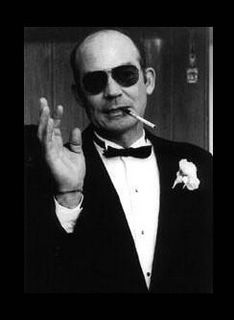 “Being shot out of a cannon is always better than being squeezed through a tube.”-Hunter S. Thompson, Kingdom of Fear

Thompson was a sometimes-Key West resident and a frequent island visitor. He was an occasional Green Parrot patron and more than a few stories about him circulated around the bar today.
I wish I could find a copy of the Yellow Pages ad he placed in the mid-seventies for high-speed, no running lights, moonless night boat tours of the keys that promised to show “the soft underbelly of the florida keys”. The phone company unwittingly ran the ad for a year and I believe he used his real phone number.