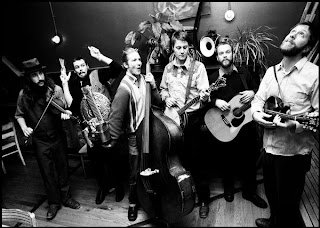 In bluegrass and 0ld-timey related news the return visit of The Hackensaw Boys is imminent.
These Charlotttesville, Virginia-based, rough-and ready, nationally-touring acoustic string combo last visited us in 2007. They’ll be here Monday at 10 PM and Tuesday at 5:30 and 10. So watch out!
If you want to check out what they were like on their last visit to the Parrot check out this youtube clip here and you’ll see why we say Watch Out!
Here’s the press on them:

The Hackensaw Boys, a rough and ready, nationally-touring bluegrass band, bring their high octane brand of roots music to The Green Parrot with shows at 10 p.m. on Monday, January 30, and 5:30 p.m. and 10 p.m. on Tuesday, January 31.

Flat-out, hard-core barnburners, the energetic acoustic string combo specializes in Appalachian-informed roots music and combines fiddle, banjo, guitar, mandolin, mouth harp, upright bass, and various percussive curios into a yodel-enhanced hootenanny. They first began playing their joyful blend of old-time tinged music in Charlottesville, Va., in 1999. While drawing upon the spirit of the mountains, their music is sophisticated and informed by the best elements of punk rock and classic country music.

They’ve toured extensively with the likes of Modest Mouse, the Flaming Lips, Cake, Cheap Trick, Camper Van Beethoven, De La Soul and the Detroit Cobras. They’ve done coast-to-coast dates as the backing band for Country Music Hall of Fame member Charlie Louvin (of the Louvin Brothers) and been featured on NPR’s “Weekend Edition with Scott Simon.” They’ve shared a New Year’s Eve bill at the Ryman Theater in Nashville with the Del McCoury Band and played three sold-out nights headlining at the Paradiso in Amsterdam.

They’ve been known to use four studios, three rock stars and two continents to make one album. They used to live on a bus and they still enjoy playing in the street. Who are these guys? The HackensawBoys. They don’t live on a bus anymore, but they’ve got enough spirit and songcraft to take you for one hell of a ride.

They’ve survived departures and arrivals, blessings and, most importantly, each other. Add to this, thousands of nights in hundreds of clubs from Nashville to Bangor, from Los Angeles to Rotterdam and you begin to get an idea of the dedication and sheer mule-like tenacity that is the Hackensaw Boy ethic