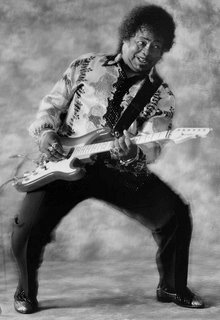 When he’s not turning somersaults, doing backwards flips, and standing
on his head — all while playing, of course — Guitar Shorty is prone to
cutting loose with savagely slashing licks on his instrument. Live,
he’s simply amazing — and live he’ll be, at The Green Parrot Bar, on,
Wednesday, July 7th, at 10 o’clock.
In 1957, Shorty cut his debut single, “You Don’t Treat Me Right,” for
Chicago’s Cobra Records under Willie Dixon’s astute direction. Three
superb 45s in 1959 for tiny Pull Records in Los Angeles (notably “Hard
Life”) rounded out Shorty’s discography for quite a while. His
penchant for stage gymnastics was inspired by the flamboyant Guitar
Slim, whose wild antics are legendary.
During the ’60s, he married Jimi Hendrix’s stepsister and lived in
Seattle, where the rock guitar god caught Shorty’s act (and presumably
learned a thing or two about inciting a throng) whenever he came off
the road. Shorty’s career had its share of ups and downs — once he was
reduced to competing on Chuck Barris’s zany The Gong Show, where he
copped first prize for delivering “They Call Me Guitar Shorty” while
balanced on his noggin.
Los Angeles had long since reclaimed Shorty by the time things started
to blossom anew with the 1991 album My Way on the Highway for the
British JSP logo (with guitarist Otis Grand in support). From there,
Black Top signed Shorty; 1993’s dazzling Topsy Turvy and 1995’s Get
Wise to Yourself have been the head-over-heels results so far. Roll
Over, Baby followed in 1998
There will certainly be incited throngs on Wednesday night at The
Green Parrot Bar, your Southernmost Center for Culture at the corner
of Whitehead and Southard Streets.
For additional information call The Green Parrot at 294-6133.