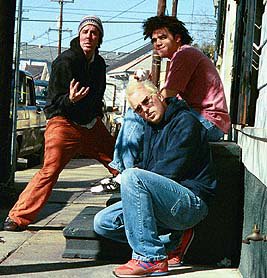 East Texas funk and soul is featured at the Green Parrot when the
Austin-based trio The Greyhounds take the stage on Saturday and
Sunday, February 18th qnd 19th, with a special 5 PM “soundcheck” on
Sunday afternoon.
The Greyhounds have turned heads on their latest national tour by
combining elements of classic funk, old-school blues and straight-up
soul.
Formed in L.A. in 2000, The Greyhounds hit the road and immediately
began building a reputation for relentless touring, playing 223 dates
in 45 states in the last year alone.
Shows included performances at The New Orleans Jazz and Heritage
Festival, Austin’s SXSW Music Conference, Tipitina’s NOLA, and The
Knitting Factory (New York and L.A.).
Their dedication to touring and their tight and energetic shows
have earned them the respect of their peers and fans alike.
Lately, The Greyhounds have hooked up with Robert Mercurio and Stanton
Moore of NOLA’s own funky favorite and touring giant, Galactic, to
produce their newest record: Liberty
See what all the excitement is about this weekend at The Green Parrot
Bar, your Southernmost Center for Culture, at the corner of Whitehead
and Southard Streets.
For additional information call The Green Parrot at 294-6133.