Here’s 14-year old Tommy McKinney from Romulus, Michigan as he prepares to play his first tune in yesterday’s 18th Annual Green Parrot Old Time Fiddlers’ Contest. Tommy’s Dad Jim, also a fiddler, called the bar a few weeks ago after hearing about our contest on the internet and wondered if they could still enter and could someone lend them a fiddle when they got here, since they were flying in. 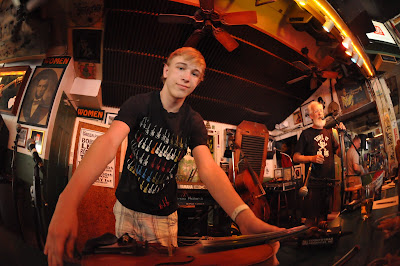 We said, No problem, done!

And now let’s cut to the next picture where we see first place winner, you guessed it, none other than  Tommy McKinney, being sincerely congratulated by Second Place finisher Seamus Murphy.
Seamus is no stranger himself to Green Parrot Fiddle Contests, having won two himself, the first of which, if memory serves, was when he was exactly Tommy’s age. another coincidence is that Seamus was half of yesterday’s other father-son fiddling duel, going head-to-head with his father Bob Murphy, pictured at the microphone in the photo above. 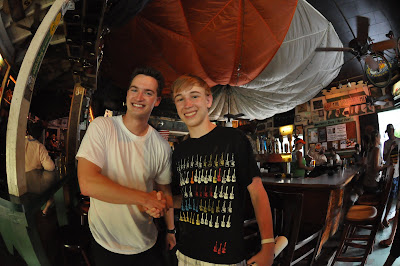 If there’s any way this can have even more of a story-book ending, here’s a picture that tells it all: Dad Jim McKinney with his third place award, with Tommy and his First Place gear on the right, both fiddlers  flanking the proud mom and wife, all beaming. 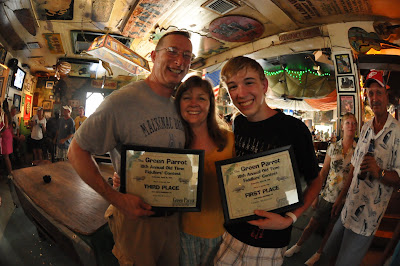 Well, you know,  the music yesterday was awesome, all nine contestants were great, the beer was cold as usual, there was plenty of dancing and foot-tapping to the old-timey fiddle sounds.
But what what really made this event so special was how this family pictured below, the McKinney clan, all 7 or 8 of them, who had entered the Parrot just a few short hours before, not knowing a soul in the saloon or in all of Key West for that matter, in the course of those few short hours would be embraced by Parrot patrons and staff, fellow musicians and other kindred spirits caught up in that sweet, transcendent moment that only a confluence of good music and good will can create.
And you know what else, It happens all the time here and that’s what we’re here for. That’s our payoff. 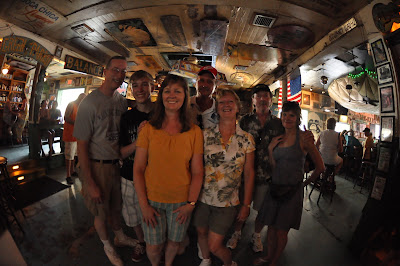 I’ll have more photos later, but this story just seemed too compelling to wait.