Bingo begins at 7 PM, callers tonight are Buco and Dennis, pictured below, with Jello shots by Ginger King. 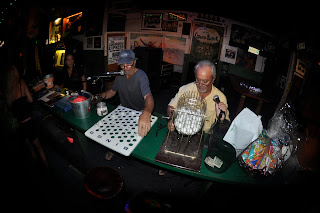 Bingo is held every Monday night  between 7 and 9 PM at The Parrot and is shared on alternate weeks by either The MARC House or Sister Season, who has turned over the usual “Sister Season” Bingo night to raise some money for Andy’s hospital bills.
Similarly, our doormen, “Wookie and Dude” are generously “paying it forward” by donating some $600.00 in recently-aquired donations from their benefit in order to help Andy who finds himself in a situation not unlike Tim and Dude a few short months back.
It’s tons of fun and it’s just a dollar a card, every penny of which goes directly to Andy. 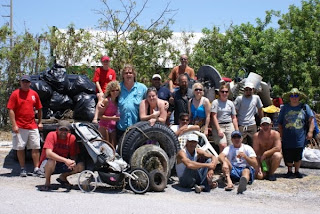 Pictured above ares ome members of The Green Parrot Kayak Society after one of their Sunday clean-ups of nearby mangroves and shoreline. That’s quite a pile of trash they have collected. 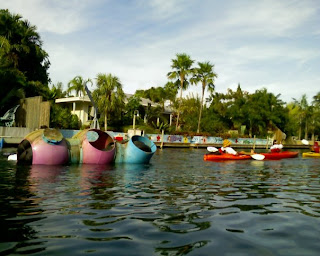 Here’s amother shot of The GP Kayak Society towing what appears to be part of The MacDonald’s playground they uncovered deep in the mangroves, apparantly washed away in Hurricane Wilma.
No trash too large or too small for these guys!