Not to sound like we’re boasting, but, you know, if there was one thing my mother taught me, it was was, “Johnny, don’t hide your light under a bushel.”

So, that said, I’d like to proudly announce that the Green Parrot has been named one of the Top Ten Bars in America by Christine Sismondo, author of America Walks into a Bar: A Spirited History of Taverns and Saloons, Speakeasies and Grogshops. 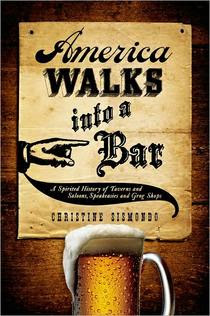 The first two people I showed this list said, referring to others on the top ten list, “Wow, the Tonga Room in San Francisco, I’ve been there, and, “Oh, Sun Liquors in Seattle, I know that place”, so we’re flattered not only to be acknowledged by such an authority on tap rooms as Christine Sismondo but also, to share that honor with such other fine establishments.

We were named Number Three and I would venture to guess that the other nine folks on this list share the same humble but self-satisfied feelings we do right now: It’s just so nice to know that somebody out there noticed and recorded the fact that, “Yeah, that night in your bar was off the chain and I need to say so.”

I haven’t been to any of these other saloons (I don’t get out much), but I think I can safely say, just by the way she nailed the vibe of our place, down to Frank The Cat, that Christine’s other picks are awesome and I am honored to rub elbows with them. 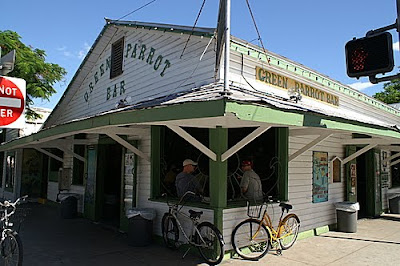 I’d also like to say, with all humility, that I always knew we had a great bar, (I knew it even in the early 1970’s, when Duval street bars were all locals’ bars and as a late-night Parrot bartender I would sometimes supply my sole patron with free beers so as not be left alone).

I pin this recent honor on an unbelievable string of great bartenders, a never-ending parade of incredible customers, and last but not least, music that some nights sounds so tasty that it could change the way you were wired from that night on–or at least change what you thought live music could be up till then.

That combination of raw talent, unbridled and sophisticated audience bravado, and a barroom that local bassist Danny Simpson once described as a “beer-soaked sauna” created some unforgettable nights.

I’m thinking of some magic nights, nights with The New Orleans Klezmer Allstars, All That or Galactic with Theryl, “The Houseman” deClouet or nights with Vince Welnick of The Dead or more recently with Robert Earl Keen. Nights you simply could not have been more amazed if it were Miles or Jimi or Jerry onstage and you wished the music would never end.

And some nights, with The Mighty Sparrow, Magadog, or Suenalo where the band/crowd vortex was so intense you were longing for some crescendo, some safe ending, for fear there would be nothing left in the morning on the corner but a crater.

Thanks to all of you, it’s your honor, your medal and your chest.

This from Kirkus Reviews, The World’s Toughest Book Critics:

Bars. Saloons. Taverns. Clubs. Speakeasies. Whatever you call your favorite watering hole, you can be assured that Christine Sismondo knows a good place to get a stiff drink. As the author of America Walks into a Bar: A Spirited History of Taverns and Saloons, Speakeasies and Grog Shops, we figured she could give us some good recommendations on where to belly up for a proper cocktail. Here, Sismondo gives us her 10 favorite bars in America.

Located in the basement of the building that Thomas Paine died in, patrons keep liberty alive by singing show tunes around a piano bar ’til all hours of the night at Marie’s. Not to put too fine a point on this, but this place is a dive. That said, it’s been named “best bar in the world” by everyone I’ve ever taken there.

The Tonga Room is brilliant, over-the-top, high-end tiki, with excellent mai-tais and an actual barge floating down a “river” in the middle of the lounge area. An absolute must on the bar bucket list.

Every time I’ve been to the Green Parrot in Key West, I’ve seen mind-blowingly good live music. It’s also off the dreaded Duval strip, which means a greater likelihood of interaction with the locals, and at our last call, home to a charming bar cat, Frank. 601 Whitehead St., Key West, Fla.

I’m a little too old to be a regular at Sun Liquor, but this is the only bar I’ve ever walked into that desperately made me want to be a bar owner. The décor and service are understated yet perfect and the cocktails are phenomenal.

For history and beauty, go to New Orleans’ Napoleon House or Tujagues. For a nice, relaxed good time, the Chart Room is the ticket. Although it’s an open bar on a corner two blocks from Bourbon, it feels like a hidden gem.

The other Bukowski’s is in Cambridge, and I hear it’s even better. That said, the Back Bay location is one of the more comfortable places to pass a few nighttime hours in downtown Boston. Despite being named after the dive-bar bard, it caters to a wide range of clientele and offers excellent beer choices in a wholly unpretentious setting.

If this bar were in New York City, people would still have to remark on the first-rate selection of hard liquor. The fact that it’s in Syracuse makes it all the more amazing. It’s a veritable library of booze staffed by passionate and knowledgeable bartenders.

I struggled between Chicago’s Andy’s Jazz Club, which boasts great music and a classy atmosphere, and The Lodge, which, I swear is where Springer recruits his guests. In all fairness, for the people-watching, I have to pick The Lodge.

When in Baltimore, I never fail to drop in to the Whistling Oyster, a bar that caters to both tourists and locals, particularly those who work on the boats at Fells Point. It really is the kind of place where you wind up making friends with strangers and occasionally taking the party down the street to the neighboring Cat’s Eye or Horse You Came In On Saloon, the latter haunted by that other bar-room bard, Edgar Allan Poe.

Hard to pick just one iconic bar in New York, but the saloon at the back of the Oyster Bar in Grand Central Station ought to be mentioned. Replete with a secret entrance and a nautical theme, it puts one in mind of a different era.

The Sea of Happiness Lounge, helmed by Captain George in the Cass Hotel in Chicago. The charming George was usually more inebriated than his patrons, and he remains one of the more memorable hosts I’ve had the pleasure to meet.

Christine Sismondo is the author of America Walks into a Bar: A Spirited History of Taverns and Saloons, Speakeasies and Grog Shops, available from Oxford University Press.