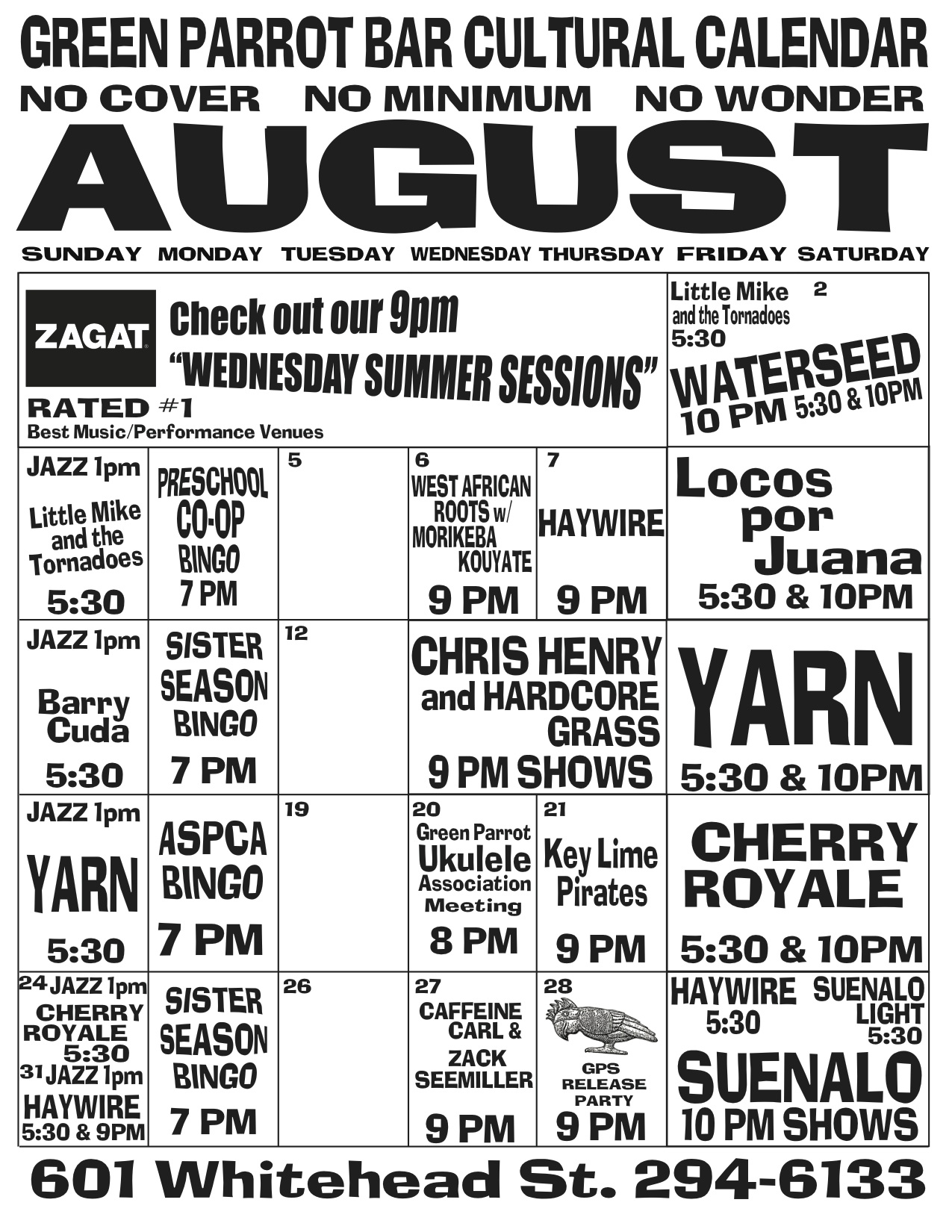 The august cultural calendar is posted, and with our Wednesday Summer Series  a month in, it’s probably a good time to revisit just what The Wednesday Summer Series all about.
As first conceived, besides just giving our patrons an excuse to step out  for an early-evening, mid-week visit to The Parrot, we wanted  to use this night to shine a light on a  particular musician,  or band, that may have fallen off our radar in the busier months of the year.
We also thought we might use this night to  highlight a specific musical genre,  or perhaps emphasize a specific instrument (like our monthly ukulele night)
One month in and we seem to be doing that, and   it’s a kind of a snapshot of what our musical mission has been all along. that is: be eclectic,  mix things up, nothing really is out-of-bounds, with the only real parameter being: It’s got to be good!
So this month, we kick things off with a bona fide Green Parrot Cultural Event, Ancient West African Roots sounds, supplied by Senegal’s Morikeba Kouyate. His  30-year career celebrates his  700-year family lineage in West Africa music as he  plays tribal instruments, tells stories, and acts out “warrior folklore.” He will be accompanied onstage by Spam Allstars guitarist Jose Elias
The second Wednesday,  from our own hemisphere and our own  cultural wellspring, on Wednesday, August 13th, beginning at 9 PM,  is Chris Henry and the Hardcore Grass.
Chris has been described by the International Bluegrass Music Association as the premiere Bill Monroe-style mandolinist of his generation

with The Hardcore Grass providing  a perfect backing for his brand of hard-hitting, High Lonesome Bluegrass picking and singing.

The next Green Parrot Summer Session, Wednesday, August 20th, at 8 p.m. the spotlight will shine on   The Green Parrot Ukulele Association Monthly Meeting on  with co-hosts Jeff Clarke and Tim McAlpine.

For those who have never been to a GPUA meeting, they are outstanding examples of the Green Parrot at it’s quirkiest, with an ever-growing congregation of uke-bearing aficionados in attendance, most of whom crowd the stage for a few nimble and professional sing-along covers of popular songs, while other sing and play-along from their barstools.

Following the same format as the previous well-attended, high-spirited shindigs, the meeting provides  an informal workshop  for those just starting out on the instrument with basic instruction and chord and song sheets  provided. In addition, there will be featured performers, an open mic and a play-along, in no particular order.

Come to just listen or join in. All levels are welcome and remember, spare ukes and instruction are available for those who want to try them out

Wrapping the month up,  beginning at 9 PM on Wednesday, August 27th, will be Caffeine Carl, with special guest Zack Seemiller
Carl has always a favorite on the Green Parrot stage, and Carl and Zack have been creating their own buzz on the local music scene, leaving  fans all over the island begging for more and we have managed to pin down this elusive duo for a night on our stage.