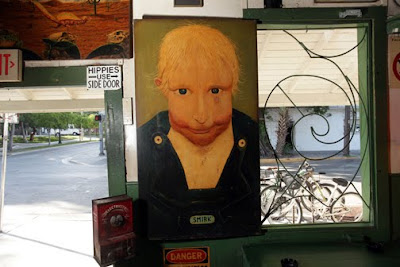 Four artists have a shot at immortality–or at least the closest thing an artist can get to immortality in Mile Zero–on the shutters of the iconic Green Parrot.

The winners of The Green Parrot Shutter Design Contest will join the historic Parrot gallery and the likes of sculptor John Martini, Bill Berg, Gil Furay, and the late Captain Outrageous, whose paintings of Albert Einstein, Benjamin Franklin and the infamous Smirk on the Parrot shutters have been contemplated by tens of thousands of locals and tourists from well-worn bar stools.

Artistic immortality also comes with a $250 stipend per shutter, eternal glory, and permanent display at the adjoining Green Parrot retail store. It has been over 25 years since a shutter has been painted at The Parrot; artists are encouraged not to wait for the next contest.

Since 1890, The Green Parrot Bar has been a welcome haven for hippies, bikers, vagabonds, free spirits, and eccentric local characters, even the odd celebrity seeking anonymity, unknowingly juxtaposed cheek-by-jowl in Key West’s center for culture of all kinds. It is a real life gallery unlike any other.

1. Designs should be submitted in color, to scale and in sketch form, no later than October 17, 2011, via email to greenparrot@gmail.com, via snail mail to John Vagnoni, Green Parrot Shutter Contest, 601 Whitehead Street, Key West, FL 33040, or dropped off in person to that address.

2. Each shutter measures 62″x17″. Designs should complement the acrylic medium used on the original bar shutters.

3. Winners will be announced on Thursday, November 3, 2011. The artist will be invited to recreate their design on the shutter either at the bar or in their own artistic space by requesting to have the shutter shipped to them. Shutter designs and shutters are the property of The Green Parrot.

The Green Parrot is your Southernmost Center for Culture of All Kinds on the corner of Southard and Whitehead streets in Key West. For more details or questions on the contest, contact general manager John Vagnoni at 305-294-6133 or email greenparrot@gmail.com.

PHOTO CAPTION: Saul Paul Stewart’s “Smirk”, the oldest and most recognizable of The Parrot’s shutters.