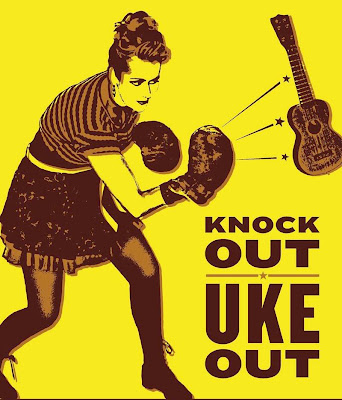 First-Ever Green Parrot Uke Out
I don’t know what to say about Thursday night’s Uke-Apocalypse except it was amazing.
I want to thank everyone who showed up whether young or old, amateur or professional, and either to listen or to participate. You made it happen. It was a perfect example of the Parrot being the venue but you guys being the heartbeat.
It was another reminder of how transcendent music can be.
Seeing all those smiling faces on that stage Thursday night I was reminded that there are few experiences that can compare with stepping into a circle of like-minded individuals, with a tuned instrument, and playing as one. The circle become like one organism.
Whether it’s on a stage, in the parking lot of some bluegrass festival, or around the kitchen table, whether with friends, family, or strangers, (probably especially strangers), it’s that circle and the seemingly primordial vibration of those strings that provides some kind of glue, some thread, that binds us all.
Being up on stage myself with all those people I was instantly transported back to a summer in San Francisco, forty years ago, in the kitchen of a house by the panhandle of Golden Gate Park, where on a nearly-nightly basis friends, sometimes only two or three, sometimes more, on some nights we spilled out of the kitchen and into the hall, would gather to play Irish music on guitar, mandolin, fiddle, autoharp, and whistle.
It was that exact same vibration of the strings-in-tune that pulled me back from the Parrot stage to that kitchen on Fell Street, pulled me back as surely as some smell from childhood or a photo of a buddy you’d thought you’d forgotten.
That’s what happened to me Thursday night, and from the looks on some peoples faces I was not alone.
I love it when music can be the catalyst and when The Parrot can be the space.
I was also reminded of something else I discovered while doing a little research last week into the history of the Parrot. I knew that in the early years of the last century, The Green Parrot building was a grocery store owned by Antonio Sanchez, grandfather of folk artist Mario Sanchez. I discovered that Antonio was also a musician and in fact would invite other local musicians to drop by after the store had closed and, with rum and cigars, I’m sure, would hold “descargas”, or cuban jam sessions in the back room of his store, often encouraging them to play late into the night. Remembering this on Thursday night, now that vibration, that thread, carried me many, many years past to that back room, that “descarga” and then brought me right back here to this room, this stage, this moment.
That said, I want to thank Bill Davis from Dash Rip Rock and local musician Tim McAlpine (is there anything he can’t play?) for spear-heading this thing, and especially for running that Workshop before the show, to try to put this experience in reach of all who chose to participate.
Thanks to Tim Wegman for bringing so many ukes from his Caroline Street store to make sure that aybody who needed a Uke had one.
Thanks to Ashley and Gretchen who blew the room away and graced the room with what I believe was the first Gillian Welsh cover I’ve ever heard here, thanks for that treat.
And most of all, thanks to each and every one of you who got up on the stage,and put it all out there, and entertained us all. And thanks especially to each and every patron, all those who crowded the bar, hoisted a beer and encouraged those folks to get up there and bang out some tunes. I got your names, we know who you are now and we’re gonna do it again.
Here’s some photos from Thursday Night 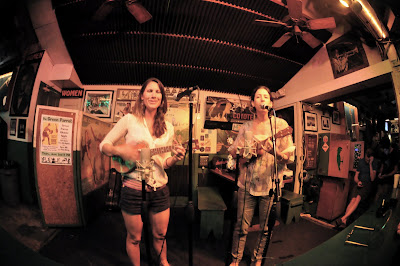 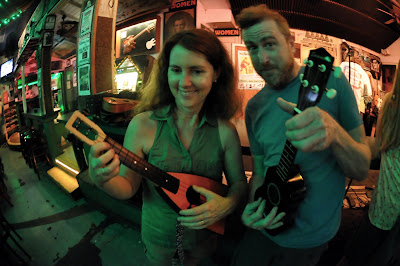 Teresa and Bill Davis at Workshop 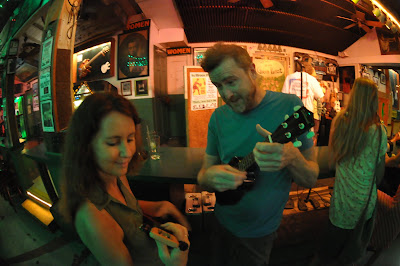 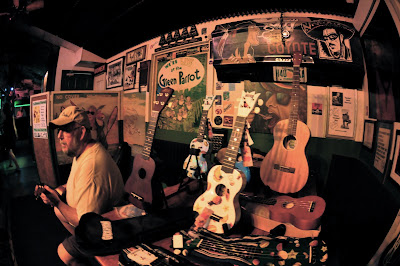 Ukes For Sale Too 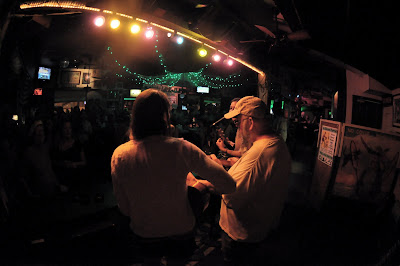 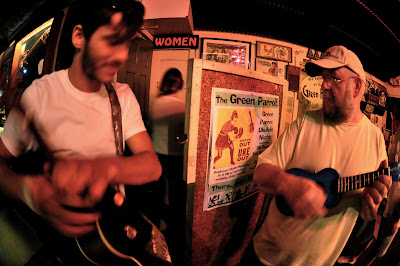 Break It That Uke 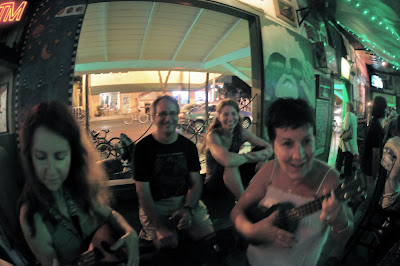 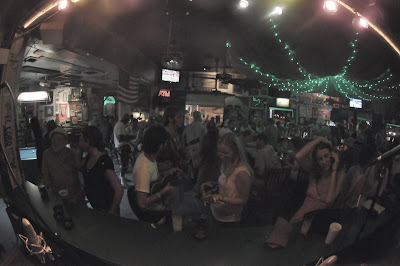 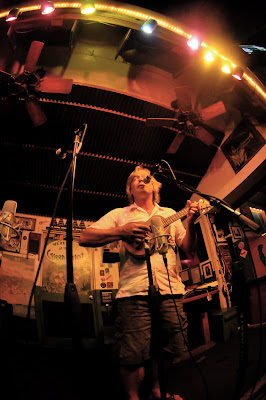 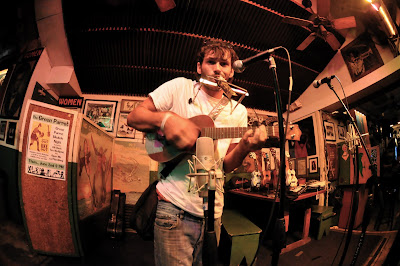 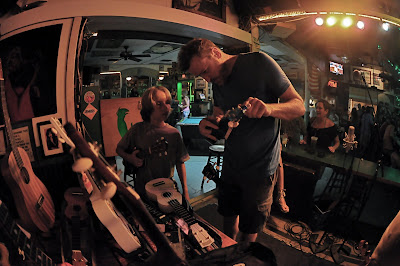 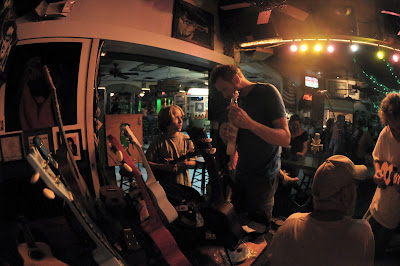 Bill Passing It On 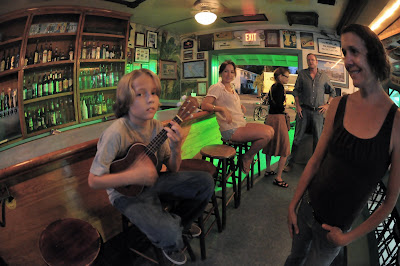 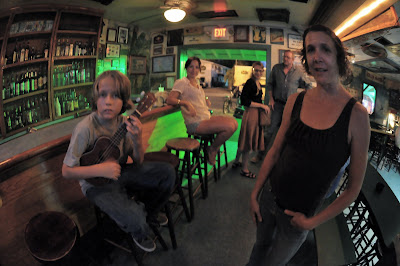 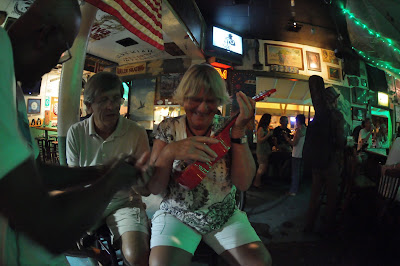 Makes You Want to Laugh 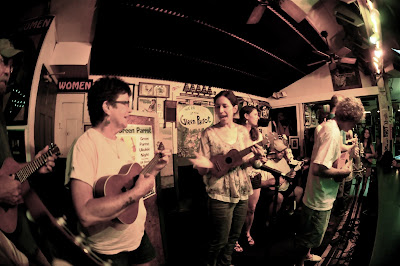 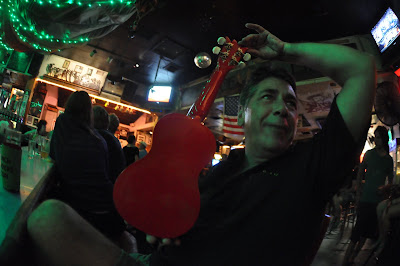 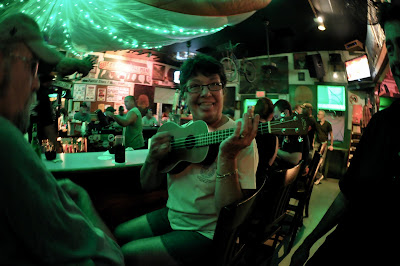 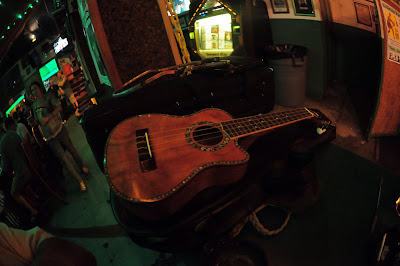 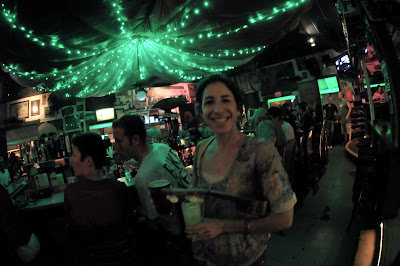 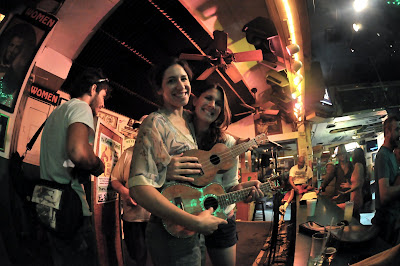 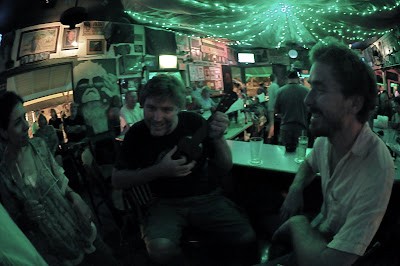 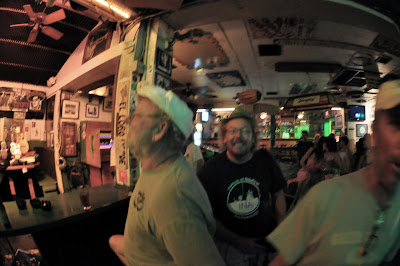 In a blur, Tim Wegman, Michael Blades and Buco 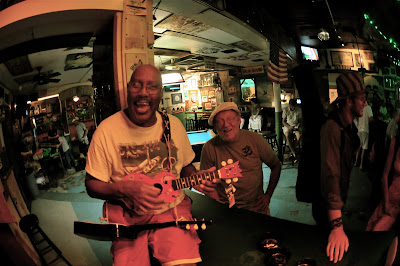