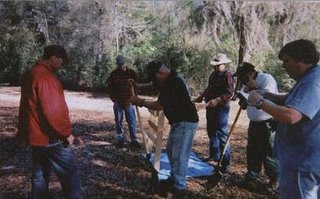 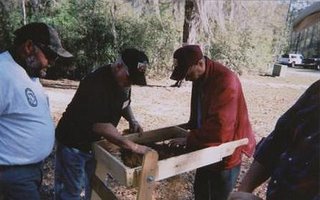 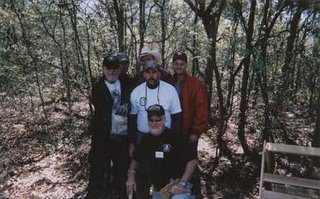 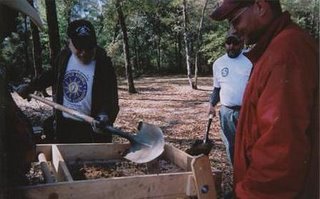 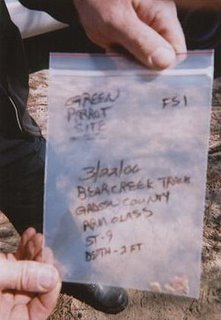 These photos were passed on to me by Harry Smid, who along with Kip Blevin are regular Parrot customers and are Park Rangers at Fort Zachary Taylor State Park, a very special piece of paradise located just down the street from the bar.
Harry and Kip were part of a state Archaeological Monitoring Resource class working on a project in The Talquin State Forest west of Tallahassee. Before a new road could be built in the Forest an archaeological survery needed to be done and Harry and Kip were on the team selected to do it. Nine test holes were dug to see if any artifacts were in the area. On the last dig, about three feet under the surface, is were the artifacts shown in the last photo were found.
They are believed to be pieces from a bone blade. As the owner of the blade was sharpening it, theses pieces were discarded. Although it is hard to put an exact date on them since there were no markings to denote any specific tribe, they are believed to be between 2,000 and 10,000 years old.
Now here comes the good part. Since Harry and Kip’s team had discovered more than three artifacts in the same test hole the were permitted to choose a name for the site. In a letter Harry gave me along with the photos he said, “Kip and I are regulars to the Parrot and the other guys on the team have visited Key West and are familiar with the G.P.. So we decided to name it The Green Parrot Archaeological Site. The paperwork on it and our discovery has been done and now sits in the Florida Master Site File of archaeological places located in Tallahassee. The site will retain this name forever-it will never change. Enjoy!”
We are so grateful for Harry and Kip and the other members of the team to have honored us in this way and I apologize for taking so long to post this on our site but hey, I guess if those pieces of bone waited 10,000 years to see the light of day, what’s a few more days…Thanks again guys, you’re the greatest.