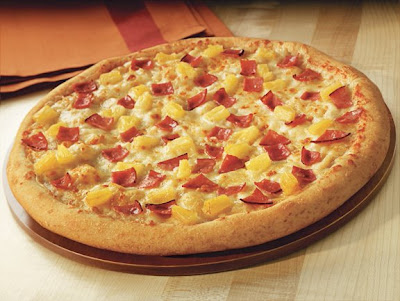 a  facsimile ham and pineapple pizza.

The New York Times announced this afternoon that Brooklynite Sam Sifton, currently the cultural news editor at the Times, will be taking over the job of the paper’s restaurant critic, starting in early October,  replacing the articulate but demanding Frank Bruni, NYT restaurant critic since 2004.
In response to today’s announcement, in the NYT’s Diner’s Journal blog,  Sam answered a few of the reader’s online questions.
One question concerned where he would like to travel on any pre-job eating tour. His tongue-in-cheek reply was that he “had just booked flights to and hotel rooms in Paris, Aix-en-Provence, Brussels, Shanghai, Barcelona, Riga, Los Angeles, Seattle, Toronto, Mexico City, Stellenbosch, South Africa and Big Pine Key, Florida (home to the only credibly fantastic ham and pineapple pizza on Earth — no lie).”
Whoa, Sam, you got us in with some heady company there: Paris, Shanghai, Barcelona, Los Angeles….and…Big Pine Key?
You gotta love it. This man, in his first official pronouncement from his Ivory Tower mentions us, and not just us, i.e. Key West or Florida Keys, but this little backwoods pizza joint on which to bestow his unsolicited 24-carat testimonial.
While he doesn’t mention the place by name, you know we’re thinking  A Nice Place…if You Can Find It.
Man, Ham and Pineapple pizza, I’m ready to get in the damn car right now.
But, wait, I hope this doesn’t fuck things up for us. Scads of city folk from New York, searching out the perfect slice, clogging up US 1 at Key Deer Blvd,  Foodies from all over milling around The Blue Hole in  in their orange crocs,  scaring the real crocs,  or day-trippers from South Beach,  button-holing some Big Pine Key Road Prisoners to give up some directions. (“Let’s ask those men, they look like locals”)
Oh well, we’ll burn that bridge when we get to, for now let’s just give credit where credit is due, to those little-old-pie-makers from up the road a bit, who  one time created a pizza that blew someone  away, some much so, that  the guy who ordered that pie remembered it on what well may have been the biggest day in his life.
Now, that’s a pizza.
Clearly, the Times was not too concerned about choosing someone unrecognizable–although the paper does seem to be in the process of scrubbing their archives of his face, we did find this teeny image so we know who to look out for in the future.

To give you an idea of what the new critic has to look forward to, here’s a Wanted poster from Frank Bruni’s heydey, reward posted and all. 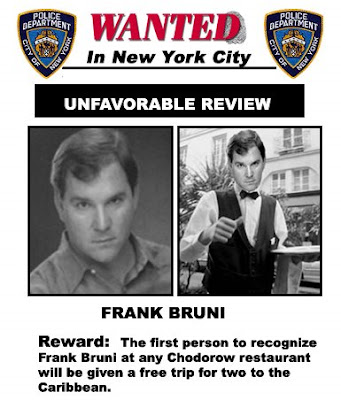 We’re sure that plenty of restaurants had that same grainy black and white photo of Frankie Two-Stars hanging back of house. Some probably wishing more like a bounty than a reward.