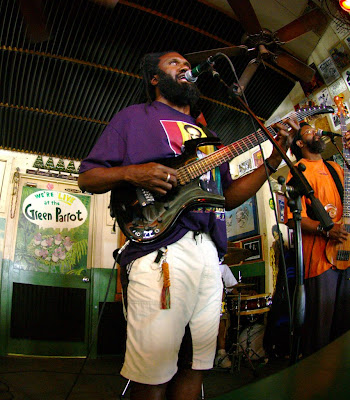 Talking to Rockin’ Jake today I learned that Corey Harris, pictured here at a Parrot appearance last year, has been named one of this year’s MacArthur’s Fellowship twenty four recipients. Also known as the “genius grant” it’s worth $500,000.00 to each recipient. Given with no strings attached the gift is considered by the Foundation to be an investment in a recipient’s “originality, insight, and potential.”
One of our favorite people, he is described as a blues musician in the award but that’s like saying Audubon was a guy who liked to draw pictures of birds. Harris is a blues musician it’s true but he’s also an anthropologist, teacher, scholar, family man and much more.