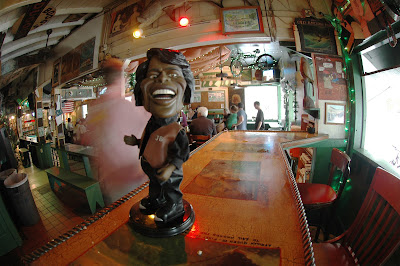 This battery operated figure, displayed on a shelf by the front door was a coveted piece of Parrot ephemora, so much so I guess, that in a moment of unforgetable late-night bravado, a car screeched to a halt at the front door of the bar, four men leaped out, raced in in and snatched James Brown from his perch by the door and fled before anyone even realized what the object of their larceny was.
Moments later the bar phone rang and an anonymous tipster informed the bartender that James Brown was at that very moment being proudly displayed in the nearby bar where the tipster was sitting. A Green Parrot posse was quickly assembled and dispatched to the bar in question where James was quickly recovered without incident but not without extreme posturing and speedily returned to the Parrot where he was placed on another, albeit, less accesible shelf.
The James Brown statue also figures one of my favorite Green Parrot Log Book entries.
Jimmy Boros’ typically understated entry reads: “James Brown, (The Sex Machine), needs batteries.”