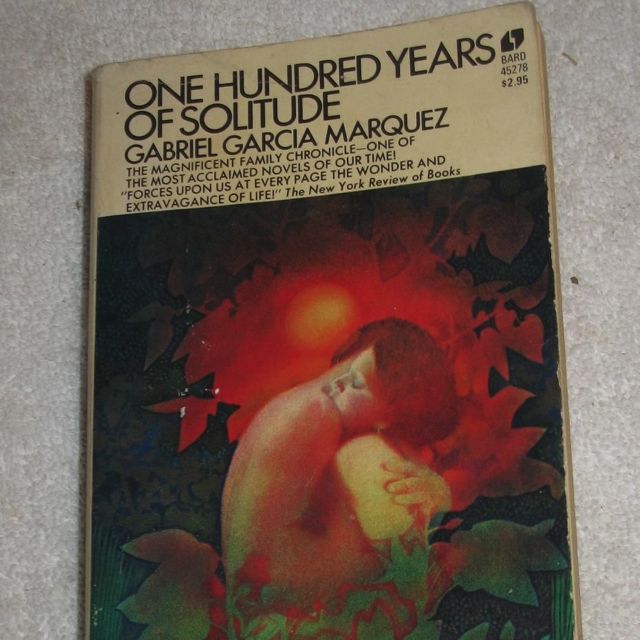 One Hundred Years of Solitude: I’m fairly certain this is the edition I had. The one I read and re-read. I say I’m fairly certain only because in the years I was a barman  here and conversations on languorous nights in the saloon would turn turn to letters, which they did more often than one might imagine, I would bring this particular one up, recently published, and if the listener was among the uninitiated, I would suggest it, more than once offering my copy as a loaner, even going so far on one occasion as to leave the soon-to-be recipient of the novel to watch the bar for me while I sprinted home, just a few doors down. It was that kind of bar, and it was that kind of book.

To call it haunting would not do it justice, leaving images that flooded into  my minds-eye as vividly today when I received a text of his death, as they did when I first opened the cover 40 years or so ago. Images of a spanish galleon buried deep in the jungle, it’s hull cracked open and filled with orchids, an itinerant gypsy-scientist postulating that the earth was round, like an orange, while dragging magnets through the streets of the  town, magically pulling pots from their shelves and nails from the boards of their houses.

From the first page, the first sentence, quoted below,  it was unlike anything I had read before,

“Many years later, as he faced the firing squad, Col. Aureliano Buendía was to remember that distant afternoon when his father took him to discover ice. At that time Macondo was a village of 20 adobe houses built on the bank of a river of clear water that ran along a bed of polished stones, which were white and enormous, like prehistoric eggs. The world was so recent that many things lacked names, and in order to indicate them it was necessary to point.”