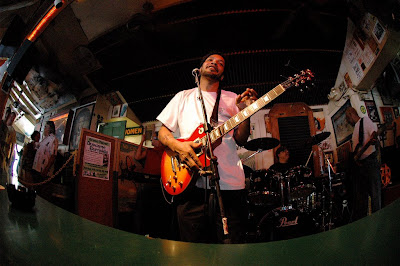 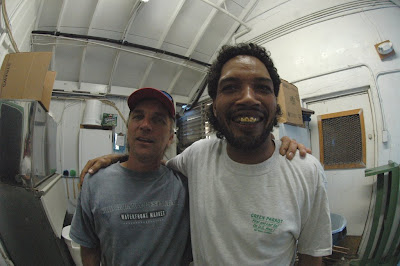 Former North Mississippi Allstar Duwayne Burnside, pictured above onstage and out back with Buco between sets,who gave a
scintallating performance here last spring brings his hard-hitting
North Mississippi Hill Country Blues back to The Parrot to for one
night only this Saturday, January 13th beginning at 10 pm.

Duwayne was born in Senotobia, Mississippi and grew up hearing his
father, R.L. Burnside, as well as neighbors play guitar-driven
Mississippi hill country blues. He was playing the guitar before he
was old enough to hold it himself.
Growing up, he played guitar behind his father, and backing up local
club owner Junior Kimbrough and The Soul Blues Boys. And with Memphis
being as close as it was, Duwayne began playing and sitting in with
seasoned and well known musicians that frequented town, such as Little
Jimmy King, Albert King, B.B. King, Bobby Blues Bland, and others.
Duwayne was also playing in R.L. Burnside ‘s family band Sound Machine
Groove, which combined the hill country sound with the soul and R & B
that was pouring out of Memphis at the time. Between the two styles
and his growing experience, Duwayne became an outstanding rhythm
player with the ability to blend with all styles of music and any
musician. While playing rhythm Duwayne was also paying attention to
all other parts being played, and stepped up to fit in anywhere he was
needed whether is was drums bass or guitar. Duwayne leads began to
undeniably become fused with Albert King and the heavy soul feel that
came from earlier playing experiences.
Duwayne recorded some with his father on High Tone and Fat Possum
records before moving to Memphis to open his own club, Burnside
Kitchen and Grill near Highway 61. He booked the shows, cooked the
food, sold the beer and played weekly.
In 1998, Duwayne traveled to Los Angeles to record his first full
length record as Duwayne Burnside and The Mississippi Mafia. In 2001
Duwayne sat in with the North Mississippi All Stars, It was the
missing link of sorts. His rhythm and leads were so perfectly played
and placed that one could have never known that it was his first show
with the band. From then on he toured 250 days a years with the band
and recorded with The All Stars on their next record.
Since then Duwaynehas felt the need to pull in on the reins and settle
back at home, forming a new band with a few old friends. The result is
a heavy continuation of hill country and soul blues fusion that makes
you thankful this music is still being made. And this Saturday night at the
Green Parrot, you’ll be thankful too.
The Green Parrot Bar is your Southernmost Center for Blues
Culture at the corner of Whitehead and Southard Streets. For
additional information call The Green Parrot at 294-6133 .