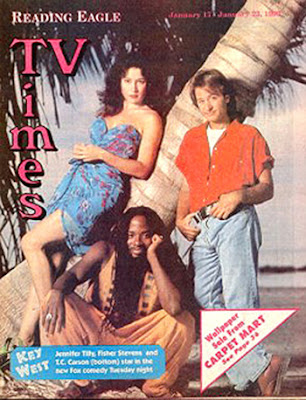 Whether it’s the rollback of drink prices to 1993 levels, the
compelling dialogue or the come-hither looks of these people on the
cover of a vintage TV Guide, our weekly screenings seem to have struck
a nerve so we want to remind viewers that the The Green Parrot will
continue to air episodes of Key West, The TV series on Tuesday
nights (coincidentally, the same night they were originally aired) at
8 pm, either until all 13 episodes are shown or until you make us
stop. This week: Season 1, Episode 3: The Great Unknown. Original Air
Date: 2 February 1993.

To recap, Key West, The TV series is the snake-bittten 1993 hour-long
television comedy-drama filmed right here in our Island City and aired
on Fox between January
and June 1993.
featuring Fisher Stevens as a factory worker who wins the lottery and
moves to Key West, Florida to follow in the footsteps of Ernest
Hemingway and become a writer.
Once there, he encounters eccentrics of every stripe, from a
Rastafarian roustabout to a muscular, mystical sheriff.

Of it’s debut, the NYT said,
The conceit of this series is that everybody in Key West is eccentric
and charmingly offbeat. This is, as any visitor knows, rather unfair
but not entirely off the mark. In any event, there is an intriguing
collection of characters, including a gorgeous prostitute who serves
as local earth mother, a sheriff who has spent two years in a Buddhist
monastery and a bar owner who lives, as someone says, “out in the
ozone somewhere.”
There are therapeutic dolphins, and one fantasy sequence about a
damsel in jungle distress turns out to be the dream of an alligator.
In a future episode, a female lion tamer from a circus tells the
sheriff: “I hunt, I smoke, I eat junk food, I listen to Andrew Dice
Clay and I voted for Reagan. You still want to take me to bed?” That
said “Key West” clearly has the shuddering potential of being still
another Fox “everybody-into-their-bathing-suits” caper.

Rounding out each weekly showing on our big screen will a be a music
video concert , with weekly selections to be culled from the extensive
video libraries of Patrick and Kenny. Expect the concerts to be not
unlike selections on the Parrot jukebox: an eclectic mix of retro and
contemporary music, some bordering on the obscure, with an emphasis on
blues and/or New Orleans funk with possible side trips to T Rex or
The Red Elvises. Think Govt. Mule meets George Porter Jr.
The Green Parrot Bar is your Southernmost Center for Boob Tube
Culture of All Kinds, at the corner of Southard and Whitehead
Streets.