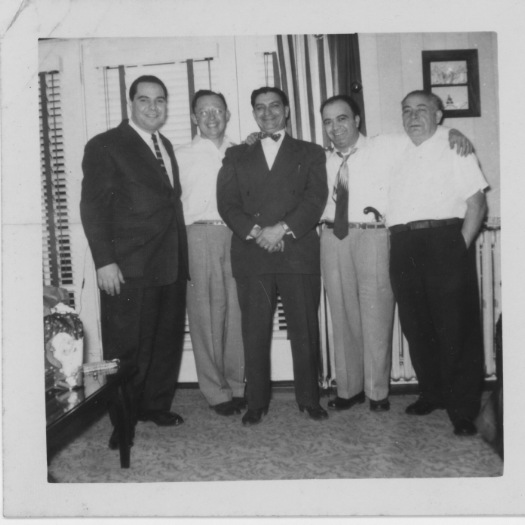 Here’s a post I put up last year for Father’s Day that and I still can”t  think of a better way to honor all these Fathers in my family who helped make me a better dad….and a better person. Thank You all.
On this Father’s Day I’d like to taken a moment to honor not only my father, God bless his gentle soul, but some of the the other men in our family who influenced me, each in their own special way.

In the photo above we see a group shot of some of the men in our family, fathers every one.

I can tell it’s Christmas by the toy flintlock pistol jammed into my dad’s waistband.
Sadly all of the men in this photo are now gone, a few of them way too soon.
On the far right is my maternal grandfather, John Cardona, from him came a strong work ethic, I’d watch him sit up at night at the kitchen table with a composition book and the stub of a pencil, teaching himself to read and write. He came to this country alone and worked for several years to save enough to start his own hat cleaning and shoe shine business, and finally bring his wife and his daughter, my mother, to this country. One of his favorite stories, retold time and again at family gatherings, was how, as a young Italian immigrant applying for a job in a South Philadelphia shipyard, he was asked by a foreman if he knew how a steam-driven stationary locomotive worked, to which he instantly, replied “More steam, more coal!” and the foreman just as quickly shot back, “You got the job!”
On the far left in the photo is his son, also John, and from him, well, he was in the stage-show business in Pittsburgh and as such represented to me a kind of a cool Mad Men sophistication which I had not seen in our family before: he drove a black 1957 Buick convertible, drank Heineken,  and threw parties to which he invited his interior decorator.
In the center of the picture, with the bow tie and pencil-thin moustache, is my maternal grandmother’s brother, my great uncle, Carmen Donato. His sophistication seemed more rooted in old-country culture than fashion or current mores. It would be easier to picture him in a duel or a vendetta than cracking a Heineken. When he lived with us he would sit on the front porch in the morning impeccably groomed, complete with a fresh-cut flower in his lapel and a pint of Old Overholt in his suit jacket pocket, prepared to greet either gender of passerby.
On his right is my uncle Dick, and what did he bring to the table? Well, a lot.
First of all he showed me that not only was it ok to be not-italian, in his case German but, beside diversity Dick provided some qualities that were not so apparent with other men in our family. He worked hard, as did all the men in our family, but the difference with uncle Dick was that at the same time had this richly textured parrallel life outside of work. He knew about fine art, played classical music effortlessly on a baby grand piano in his living room, and not only could he tune it or anyone else’s piano by ear, but he could totally disassemble the thing, with its hundreds of springs and arcane innner workings spread out on newspapers on the living room floor, and then put it flawlessly back together again. He could just as easily put new windings on the generator of his boat or field strip his shotgun. He was an avid sportsman, actually the only sportsman really, avid or otherwise, in our family, and he shared it with my brother and myself. I mean I could picture no one else in our family going out, in dead of winter, before dawn, to shoot a rabbit for dinner. The only other stories of the men in our family leaving the house with a firearm were usually cautionary tales involving a pistol rather than a fowling piece.
And that leaves Al, my father.
I don’t know what to say about him that would really do him justice. As I said earlier, he was the gentlest of souls. He was soft-spoken, patient, loving, and never-comlaining, all this in spite of the fact, or perhaps because of the fact that he had a childhood that is difficult for me to even imagine, His father died when he was just 3, in the Spanish Flu pandemic in 1917. There was no social safety net for anyone in those days, let alone newly arrived immigrants, except the meager help that other newly-arrived family members or paisans could provide , or what little charity the catholic church could offer to his young widow and her five children. Because his mother could not support them all Al was sent to a Catholic orphanage in West Philadelphia till he was 13. Years later when I was in college I volunteered to help chaperone field trips for kids in a local orphanage and when I told Al, he cried.
You would think that the residue of his childhood like his would be bitterness or contempt but instead he emerged to become a man with a deep well of humility, optimism and grace. As my brother once said of him, “It’s as if the guy never had a bad day in his life”.

It’s a testament to him that in all my years growing up, literally the only time I ever saw him get in an argument with my mother was when they were watching a Phillies game together and when the game ended my mother had a very hard time accepting the fact that If the home team is ahead after eight-and-a-half innings have been played, it is declared the winner, and the last half-inning is not played. After many, many patient explanations, she still just did not get it and Al, weary and exasperated, stated simply, “I’m going to bed” and did. End of story.

Al behind the bar at Sharkey’s. 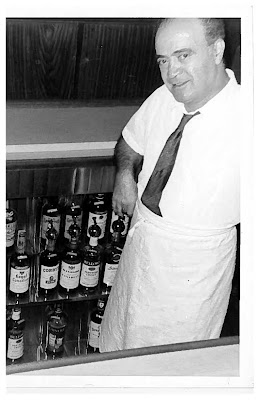 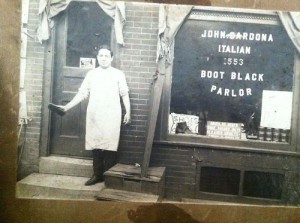 This year I am not with either of my sons for Father’s Day. One is on the West Coast and another in South American with his new family (with his new father Ernesto and my new daughter Ingrid)  But even though they are a continents away, just knowing where they are and who they are (two amazing people), I have never felt closer to them than I do right now. Thank you for inspiring me always be a better person.