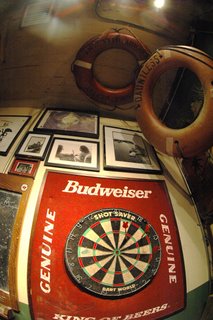 I’m going to post this one again because I just got another e mail from one of the Fat Albert Guys and he asked me to post it.It follows:
John,
The recent emails back and forth between you and I regarding the “Fat Alberts” and the life rings made me take another step in locating the infamous “Flee”. I did some research and actually found him. I’m really glad we took the effort to explore the location of the life rings. I have since reached out to Flee and we restored new life to an old friendship. Flee requested I submit his own words to you in hopes that you may post it on the blog. We’re already talking about a possible pilgrimage.

“John after emailing you, Keith AKA “Mac”, did some research on the on

the web and found me. Who would have thought that a trip in 2005 to

signature stating “Flee came back” would have reunited two Army

buddies. This is why I have a green parrot room in my home, and why

this is the best bar in the world”.

“Thanks again John. Hope to revisit soon myself”

Thanks from me as well

I received this email last night:

“Maybe you can answer this for me…It was quite a while ago (1994) but I was stationed there in the Army and worked on the Sea Based Aerostat Boats (Blimp Boats, Fat Alberts, etc). When we decommissioned the 5 ships (Atlantic Sentry, Caribbean Sentry, Gulf Sentry, Pacific Sentry and Windward Sentry) we gave 5 life rings to the Green Parrot and I’m told they were hung on the walls for some time. I’m just curious if they are still there? They should have had signatures on them if I remember correctly. Mine would appear on the Windward Sentry one. I still keep in touch with several of the soldiers I served with and would like to be able to tell them they’re still there. It’s just more trivial than anything. Can you tell me if you still have them?”
Thanks (wish I was there), Keith

I told Keith I’d have to look since as certain new pieces of Green Parrot ephemora and memorobilia percolate to the surface others may need to be folded back into the archives.
However, upon further review, the signed ring from one of the blimp boats is in fact still there and I’m posting a few photos of it.
Directly below the Gulf Sentry life ring (and just to the right of the photo of Che Guevera and Fidel Castro fishing) is a black and white photo of the blimp boats tied up at thethe old Navy base just a few blocks down Southard Street from The Parrot.
Although ostensibly used to monitor Caribbean weather conditions, it was common knowledge that these high tech dirigibles, equipped with state of the art radar were to be the Maginot Line of The War on Drugs, tethered 1000 feet above the Straits of Florida and able for the first time to provide simultaneous surviellance of both The Yucatan Channel and The Windward Passage.
We all remember fondly the guys from the blimp boats and we especially remember the party they threw for themsleves when they left.
Oddly enough, we remember too the men, perhaps sitting across the bar at the same time, oblivious to the irony, hoisting their own beers, the men who were, perhaps a few years earlier the captains of shrimp boats with fake water lines painted on their hulls or the captains of souped-up lobster boats built more for the coasts of Jamaica than fishing the Cay Sal Banks. 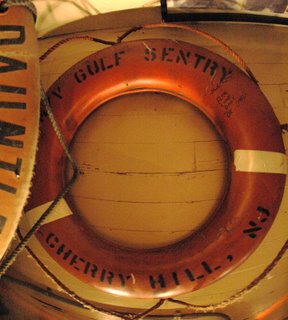 Here’s the Gulf Sentry life ring on the ceiling.
The life ring on the right is from The Dauntless, one of Mel Fisher’s Treasure Salvors ships brought in by our friend Jeff.
Below the rings is a photo of the Blimp Boats docked at the navy pier down the street from the bar 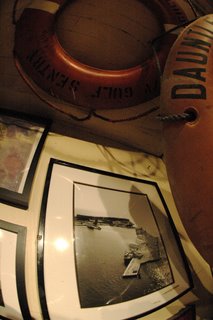 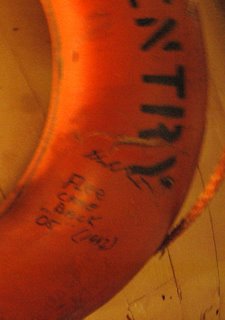 After I told Keith I’d look into it I got this reply:

“Thanks a lot John. I really appreciate your response. I still have a few
good photos of the boats myself. They were such a huge topic of
discussion among tourists and locals alike way back then. It’s nice to
know that you still have photos on the wall too. We al loved that job,
Key West (the Green Parrot) and all the memories we took with us. I’d
love nothing more than a vacation down there and a chance to stop in for
a few. Maybe I’ll plan something for a winter getaway. (You guys don’t
get the snow…lol)

And keith’s email after seeing the pictures:
Wow! I recognize the name. It’s Wayne Fleenor’s signature A.K.A. “Flee”.
I actually continued to serve with him at Ft Stewart after I left Key
West. More coincidentally I even roomed with him. That’s incredible!
Those area great pics. Thanks again for taking the time for this. You
made my day!

I forwarded the blog link to two other soldiers who served aboard the
boats.