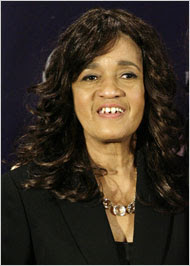 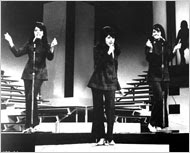 The Ronettes in 1966. From left, Estelle Bennett, Ronnie Spector and Nedra Talley-Ross.
By BEN SISARIO
Estelle Bennett, one of the beehived queens of 1960s girl-group pop as a member of the Ronettes, has died at her home in Englewood, N.J. She was 67.
She was found on Wednesday in her apartment by a friend, after family members had been unable to reach her for several days, said her daughter, Toyin Hunter. The cause was colon cancer, Ms. Hunter said.
With their short skirts, heavy makeup and enormous towers of Aquanet-steadied hair, the Ronettes were New York’s sassy, street-smart variation on the virginal girl-group model. Their biggest hits, like “Be My Baby” and “Baby, I Love You,” embodied the forceful “wall of sound” aesthetic of their producer, Phil Spector, with a simple but reverberant backbeat and swells of strings and vocals.

The group was led by Ms. Bennett’s younger sister, Veronica (better known as Ronnie), who, with Ms. Hunter, survives her. It also included their cousin Nedra Talley. Their unpolished but flirty voices, and Ronnie’s breaking “whoa-oh-oh-oh-oh” in “Be My Baby,” have echoed through generations of female rock singers.

After winning a talent contest at the Apollo Theater in 1959, they started to make a name for themselves dancing the twist at the Peppermint Lounge. The three young singers sang backup for Joey Dee, Bobby Rydell and others, and beginning in 1961 began making their own records. After several early singles failed to become hits, they signed with Mr. Spector’s Philles label in 1963 and released “Be My Baby” that August.

An immediate hit, the song went to No. 2 and sold two million copies. Over the next three years the Ronettes released a series of singles that have become classics, including “(The Best Part of) Breakin’ Up” and “Walking in the Rain,” though none of the singles after “Be My Baby” reached the Top 20.

The three young women developed their signature look together, but Estelle, who attended the Fashion Institute of Technology in Manhattan, had a particular flair for fashion and design. Ronnie — who married Mr. Spector in 1968 and later divorced him — dominated the group, while Estelle developed a role as “the quiet, sophisticated one,” Ms. Talley, who now goes by the name Nedra Talley-Ross, said in an interview on Friday.

As the group became famous, Estelle had a series of famous suitors, including Mick Jagger, George Harrison and Johnny Mathis, Ms. Talley-Ross said.

The group broke up in 1966, leaving Estelle devastated. She released a single, “The Year 2000,” which set a vision of nuclear apocalypse to Ronettes-like music, and made a few other recordings. But soon she left music, and for much of her adult life Ms. Bennett struggled with mental illness; she was also homeless for a time, her daughter said.

The Ronettes sued Mr. Spector in 1988, seeking $10 million in what they said were unpaid royalties and income made from licensing the group’s songs to movies and commercials; they said that they had received only one payment from Mr. Spector, for $14,482.30. They lost the licensing part of the case but were still able to collect more than $1 million in royalties, according to Jonathan Greenfield, Ronnie Spector’s husband.

In 2007 the Ronettes were inducted into the Rock and Roll Hall of Fame, introduced by Keith Richards. Ms. Bennett made a brief acceptance speech but did not perform with her old band mates. Still, Ms. Talley-Ross said, she had not seen her so happy in years.

“Estelle did not want the Ronettes to end,” she said.