A moment from Civil War enactments of the past with a Green Parrot connection.
This photo hangs in the Parrot and shows former bartender and next-door neighbor Eric Bissell lettin’ a civil war era black powder cannon rip one off from the ramparts of Fort Zachary Taylor.
While I wouldn’t want to characterize Eric as a gun nut we all knew he liked a good KABOOM once in a while whether it was throwing a lit string of firecrackers behind the bar or rolling his little caisson out on his second floor balcony for his idea of reveille.
His wife, Terri, more than anyone painfully aware of his fondness for ordnance, nevertheless arranged with the Civil War reenactors to allow Eric to pull the trigger on this cannon while she snapped the photo. That’s Eric in the middle and it’s a great picture but can not convey just how god-awful loud that concussion was, eliciting a “HOLY SHIT” from anyone standing within 30 feet while leaving our ears ringing all the way back to the bar.
Eric loved it. Way to go, Terri. 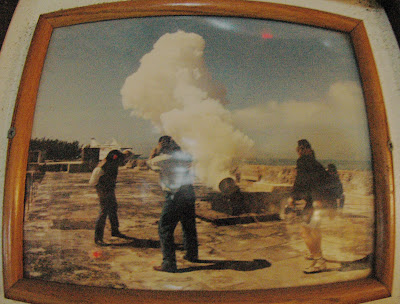 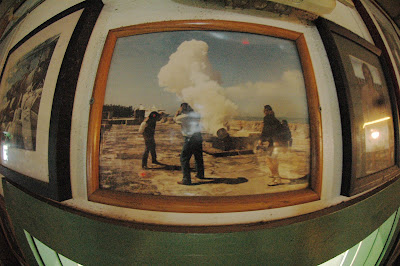