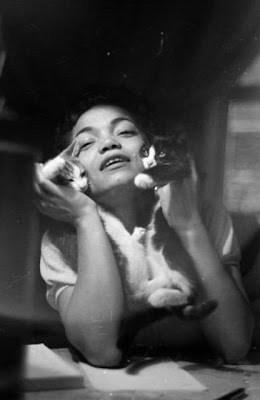 On herself: ‘They said; she’s too strange, too weird’

American singer, dancer and actress Eartha Kitt has died at the age 81, her friend and publicist has said.
Kitt died of colon cancer on Thursday, Andrew Freedman said.
She was one of the few artists to be nominated in the Tony, Grammy and Emmy award categories and was a stalwart of the Manhattan cabaret scene.
She famously played Catwoman in the Batman television series in the 1960s and was known for her distinctive, feline drawl.
She also had a number of hit songs, including Old Fashioned Girl, C’est Si Bon and Santa Baby.
Kitt was blacklisted in the US in the late 1960s after speaking out against the Vietnam War at a White House function.
She also caused controversy when she toured apartheid South Africa in 1974, arguing that she had helped weaken the regime by raising awareness of racism.
However, she returned triumphantly to New York’s Broadway in a 1978 production, Timbuktu!, and continued to perform regularly in theatre shows and concert halls.
From the 1980s onwards she appeared in numerous films, and her 1984 hit Where Is My Man found her another generation of night club fans.
Big break
Kitt rose to the top of the entertainment world from humble origins.
Her mother worked on a cotton plantation in South Carolina and was just 14 when she gave birth.
HAVE YOUR SAY
An actress, a temptress, a dancer and a songbird
Joy Pattinson, Switzerland
Send us your comments
Kitt was then given away at the age of eight and sent to live with an aunt in New York.
Her break came at 16 when she got a job as a dancer with a professional troupe touring Europe. She later sang in Paris nightclubs and appeared in several films in the 1950s.
Kitt, who had one daughter from a brief marriage in the 1960s, lived in the US state of Connecticut.