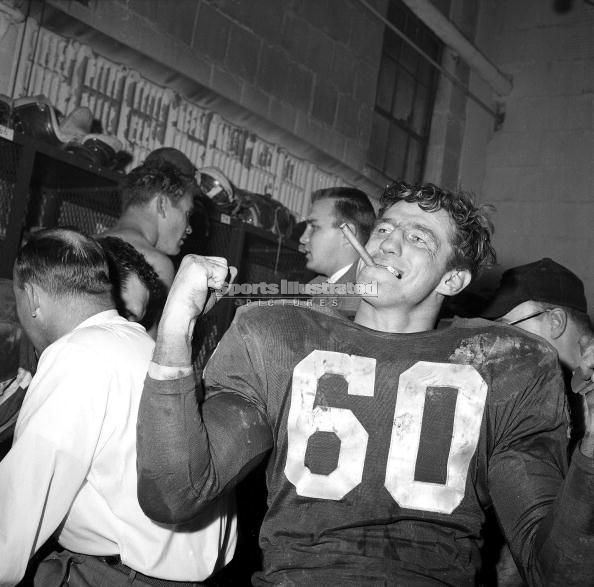 EAGLES LEGEND CHUCK BEDNARIK DEAD AT 89 OR “YOU CAN GET UP NOW TAYLOR, THIS F@#%ING GAME’S OVER!”

Philadelphia’s Chuck Bednarik celebrates after the Eagles’ 17-13 victory over the Packers in the N.F.L. championship game on Dec. 26, 1960, at Franklin Field.
Several years after this game, I was hitchhiking from Avalon, New Jersey to Philadelphia and Bednarik picked me up at the 29th Street bridge and dropped me off at the Vine Street ramp of the Ben Franklin Bridge.

I remember running along the shoulder of the road towards the idling vehicle, and yanking open the door to stick my head in, (to anyone who ever hitchhiked a lot this, is a significant moment: first inspection of who your new companion might be, and for how long) and I could not have been more floored had it been Clark Kent himself gripping the wheel and grinning.

On that few-hour ride through the South Jersey darkness, Bednarik was a man of few words, and I followed suit as he seemed more interested in simply giving a college kid a ride than chatting, I took note of that vibe even though I had so many things I was dying to ask him.
I’m still not sure if my speechlessness was out of courtesy as a rider, or stupefaction at who I was riding shotgun with. But nevertheless it was few hours riding through the pines I will never forget.
Even though the 1960 championship game, still fresh in my mind, was loaded on both sides of the line with legends and Hall-of-Famers like Vince Lombardi, Norm Van Brocklin, Tommy McDonald, Jerry Kramer, Max McGee, Ray Nitschke, Paul Hornung, Jim Taylor, Tom Brookshier and so many others, it was the play of Eagles center and middle linebacker Chuck Bednarik that makes this game one that is still talked about in Philadelphia barrooms.

In 1960 injuries forced the Eagles to ask Chuck Bednarik, their 12-year veteran to again play both sides of the line. He finished the campaign with a 58-minute performance, capped by a game-saving tackle in the Eagles’ NFL championship victory over Green Bay.
With just seconds remaining, the Packers’ Jim Taylor appeared to be heading for a winning touchdown. At 35, Bednarik was the oldest player on the field. But even after playing 58½ minutes, playing on both offensive and defensive platoons for every scrimmage play. and leaving the frozen field only for his team’s kickoffs, Bednarik still had enough left to get to Taylor.
Bednarik met Taylor at the nine-yard line, and in the words of sportswriter Bill Lyon, “wrestled him to the cold, hard ground like a rodeo cowboy bulldogs a steer and then sat on the squirming, seething Taylor until the clock blinked down to all zeroes.”Bednarik punctuated the moment with a verbal exclamation point, telling Taylor, “You can get up now, Taylor, This fucking game’s over.”