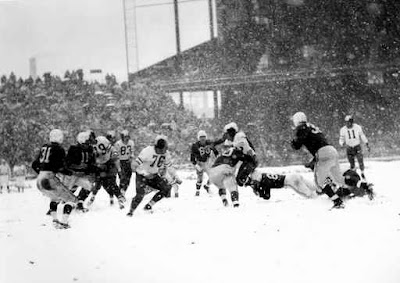 In what I certainly believe must be the last time these two teams met for any kind of title, in blizzard-like conditions the Philadelphia Eagles play against the Chicago Cardinals in the 1948 NFL championship game which they won, 7-0, at Shibe Park. To read more about this game, including a mention of how Hall of Famer Steve Van Buren matter-of-factly took a trolley, then the Broad Street Subway, and then walked the final eight blocks to get to the game, where upon arrival he was informed that he and other conscipted Eagle and Cardinal players had been ordered by the Shibe Park grounds crew to line up side-by-side to roll up the leaden, snow-sodden tarp from the playing field. This is all contained in an excerpt from the book, Rugged and Enduring: The Eagles, The Browns and 5 Years of Football by Inquirer staff editor David Cohen on the 1948 NFL championship game on the Philly.com link here 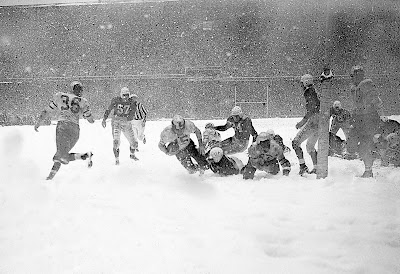 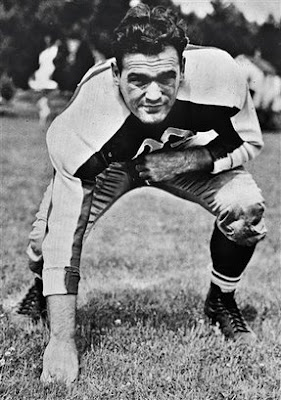 Jack Ferrante, later to be the coach at Monsignor Bonner, was to head straight down field, and Tommy Thompson was to hit him.

“Thompson,” wrote Louis Effrat of the New York Times, “fired a long pass to Jack Ferrante who, though covered by two defenders, caught the ball on the Cardinal 20. His face in the snow when he fell, Ferrante was the first to untrack himself, and while the two Chicagoans sprawled in the snow, he picked himself up and mushed into the end zone.” had the first quarter touchdown called back when he was ruled off sides, a questionable call since there were no visible lines anywhere on the field.