I love this story and animation so much, we need to post it annually 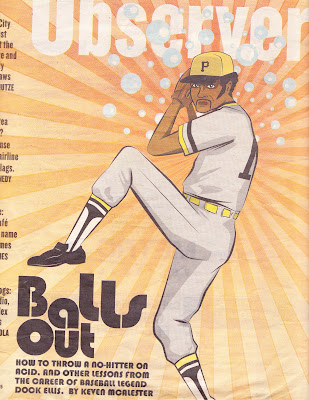 In celebration of the greatest athletic achievement by a man on a psychedelic journey, No Mas and artist James Blagden proudly present the animated tale of Dock Ellis’ legendary LSD no-hitter. In the past few years weve heard all too much about performance enhancing drugs from greenies to tetrahydrogestrinone, and not enough about performance inhibiting drugs. If our evaluation of the records of athletes like Mark McGwire, Roger Clemens, Marion Jones, and Barry Bonds needs to be revised downwards with an asterisk, we submit that that Dock Ellis record deserves a giant exclamation point. Of the 263 no-hitters ever thrown in the Big Leagues, we can only guess how many were aided by steroids, but we can say without question that only one was ever thrown on acid. 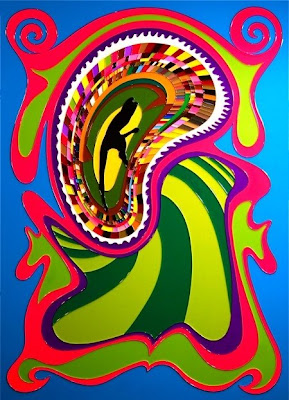 As Ellis recounted it:
“I can only remember bits and pieces of the game. I was psyched. I had a feeling of euphoria. I was zeroed in on the (catcher’s) glove, but I didn’t hit the glove too much. I remember hitting a couple of batters and the bases were loaded two or three times. The ball was small sometimes, the ball was large sometimes, sometimes I saw the catcher, sometimes I didn’t. Sometimes I tried to stare the hitter down and throw while I was looking at him. I chewed my gum until it turned to powder. I started having a crazy idea in the fourth inning that Richard Nixon was the home plate umpire, and once I thought I was pitching a baseball to Jimi Hendrix, who to me was holding a guitar and swinging it over the plate. They say I had about three to four fielding chances. I remember diving out of the way of a ball I thought was a line drive. I jumped, but the ball wasn’t hit hard and never reached me.”[4]
The incident inspired the songs “Dock Ellis” by indie rock singer Barbara Manning, “America’s Favorite Pastime” by folk singer Todd Snider, “Dock Ellis No-No” by Chuck Brodsky, and “LSD (The Ballad of Doc Ellis)” by Boston rock band Random Road Mother. 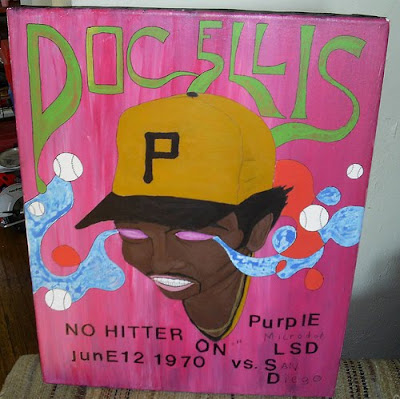