Here’s a photo just taken showing our friend Buco, in the white kayak in the foreground, staying close by early this morning after what Diana’s blog described as “a challenging night” that included multiple jellyfish stings. 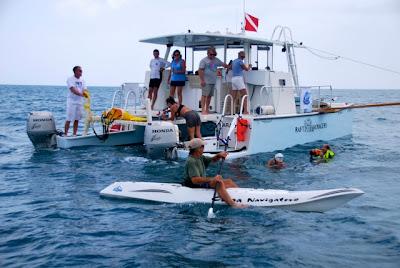 Everyone here at The Green Parrot is pulling for you Diana!
And Buco, from all the Walter Mittys at The Parrot and The Courthouse Deli across the street:
“Atta Boy!
You can keep up with Diana’s progress on her site Diana Nyad Extreme Dream .

It’s been a challenging night and morning. Diana recovered from the multiple Portuguese Man O’ War stings enough to swim – but she is struggling right now. Her usual stroke pace, between 52 and 55 strokes per minute, has dropped to 48, but she is able to swim. At 5:50am Diana stopped her freestyle stroke and complained that she couldn’t breathe properly, that she wasn’t getting oxygen to her muscles. Two doctors from the University of Miami sped out to the Voyager and administered a prednisone shot along with oxygen and other medications. Diana treaded water between 7am and 8am, and said she felt better, but still couldn’t get enough oxygen to her muscles.

Night turned into day as the dawn broke slowly on the horizon. “You’re doing better. I can see it,” said Bonnie Stoll, her chief handler. Diana’s regular feedings and hydration are continuing. Candace Hogan, who has been on most of Diana’s swims since 1978, says Diana can recover and complete this swim.

This was the latest from Diana’s blog 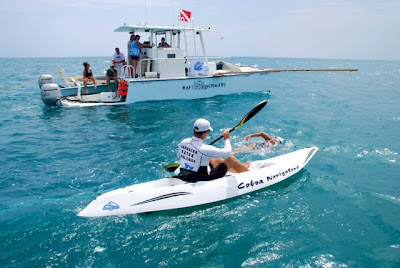 Diana seems to be gaining strength. Her rest times per hour are less and less. At 10:55am, she just had a hydration and a full feeding, and her stroke is beginning to be stronger. Bonnie, Diana and the team are grateful for your support.
Encountering Extrordinary Animals 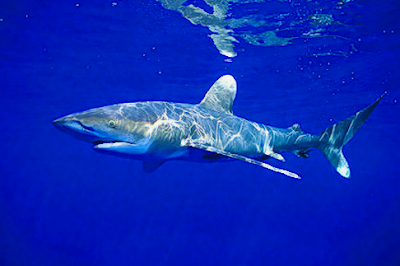 This afternoon – it is stunning to actually witness – Diana is swimming stronger and stronger. Her strokes are up to 50 per minute, she is eating pasta, gobbling bananas, bits of peanut butter sandwiches, along with high-carb & high calorie liquid concoctions. Bonnie Stoll has not left her side.

Conditions remain calm beyond expectations. Angie Sollinger, a crew member, said she has lived in the Caribbean for 27 years and has rarely witnessed this extensive period of the Doldrums.

Around 1pm – and don’t everybody get excited here – an Oceanic white tipped shark was spotted near Diana in the midst of the three boat flotilla. Diana is deeply committed to the safety of these extraordinary animals. It was a testament to the talents of her safety divers as they approached the shark. Rob MacDonald, one of the divers, swam towards the shark, where they faced off within 10 feet of one another. “I guess he thought I was more aggressive than him, and he turned in the other direction,” said MacDonald. Everyone else, it must be said, breathed a huge sigh of relief.

At 3:15pm today, Diana is now 35 statutory miles from Havana about one-third of the way to Florida.