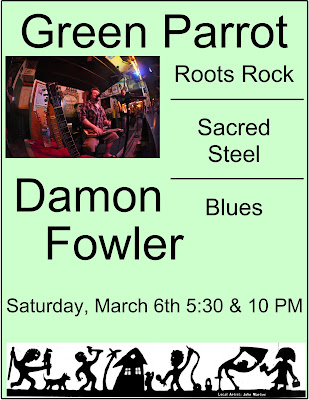 Playing a hybrid of roots rock, blues, and sacred steel, young guitar
phenom Damon Fowler brings his stinging slide from Tampa, Florida to
The Green Parrot stage with shows at 5:30 and 10:00 P.M. on Saturday, March 6th.

A winner In last year’s “Best of Tampa” poll, Creative Loafing magazine named
him “Best Guitarist… And Slide Guitarist… and Lap Steel Player…
And Dobro Player.”
Fowler’s guitar work has been compared to Johnny Winter and Jeff
Beck, while his slide guitar has a hint of the late Duane Allman. He
can play fiery guitar runs with the best of them, but it’s his lyrical
work on lap steel and Dobro that makes him stand out among a legion of
guitar players.
See what all the excitement’s about this weekend at The Green Parrot
Bar, your Southernmost Center for Culture, is at the corner of
Whitehead and Southard Streets.
For additional information call The Green Parrot at 294-6133.