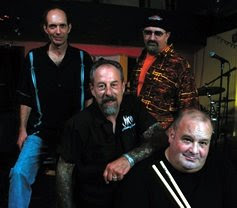 “America’s Favorite Bar Band,” The Nighthawks, will be rockin’ the
Green Parrot Bar on
Thursday March 6th, starting at 10pm, including a 5:30
P.M. “soundcheck” on Thursday afternoon.
Long before it was cool, way back in the late ’70s, the Nighthawks
were carving out touring routes through the country playing clubs and
colleges dominated by the sounds of country rock and disco. Roots
rock, rockabilly and Texas blues were hardly the standard fare. Now,
over 30 years later, the Nighthawks still continue their relentless
trek across the country and around the world.
Over the last 30+ years, The Nighthawks have earned a reputation as
one of the best and hardest working bands around. They have gotten
their widest acclaim for being one of the first and best white boy
blues bands of their generation, and for putting on a great live show.
But their acclaim and accomplishments go far beyond that.
They are among the top musical acts to come out of the Washington,
D.C. area—and are still based there. They were a roots rock band
before there was such a thing as “roots rock.” They play a wide
variety of music that has appeal to a diverse audience, mixing the
blues, rock and soul—along with rockabilly and swing.
Three of the four band members have been playing together for 30
years, a stretch that few in rock or blues can match. They continue to
bring great musical skills and energy to all that they do—it’s a
remarkable road they’ve traveled and story they have to tell.
If you’re looking for some blues/rock that kicks your butt from start
to finish, swoop on in to The Green Parrot for a dose of “America’s
Favorite Bar Band,” The Nighthawks.
The Green Parrot is your Southernmost Center for Culture of every
kind, and is located at the corner of Whitehead and Southard Streets.
For additional information call The Green Parrot at 294-6133.

Raven & Honeymouth
At the Green Parrot

Hot Latin Dance Band Caribe will appear at The Green Parrot one night
only, Friday, March 7th beginning at 10 P.M
A fixture on the competitive South Florida Latin music scene for a
decade, Caribe blends salsa, merengue, cumbia and mambo for a night of
hot latin dance music Parrot patrons will not want to miss. The
Green Parrot Bar, your Southernmost Center for Culture, at the corner
of Whitehead and Southard Streets.
For additional information call The Green Parrot at 294-6133.

Powerful and eclectic, Entrain , the drum-driven World-Pop sensation
from Martha’s Vineyard makes it’s long-awaited return to The Green
Parrot Bar with 10 P.M. evening shows on Saturday, March 8th and
Tuesday and Wednesday March11th and 12th. Also scheduled are 5:30
P.M. “soundchecks” on Sunday March 9th and Tuesday and Wednesday
March 11th and 12th.
Merging funk, rock, reggae, swamp, and worldbeat rhythm into a sweaty
good time Entrain has been praised for their ability to shift
effortlessly
between musical styles – from rock, Blues, calypso, zydeco, jazz and
worldbeat – sometimes within the same song. Their concept is all about
the synchronization of rhythms, and anything goes.
An Entrain show is a beautiful, tribal, positive, uplifting experience
that shouldn’t be missed, shifting from Funk to Ska to African to
Afro-Cuban to Zydeco to Folk Rock—all with a groove so infectious that
you had no choice but to dance.
The Green Parrot Bar, on the corner of Whitehead & Southard Streets,
is the Southernmost Center for Culture. For more information call
294-6133.

JAH Creation Reggae Band, from Wilmington, NC, brings the
powerful force of roots reggae music and their irie vibe to the Green
Parrot Bar on Sunday and Monday, March 9th and 10th beginning at 10
P.M.
JAH Creation has opened for some of the biggest reggae acts in
the world, including Culture, Israel Vibration, Third World, Burning
Spear, and The Wailers. The Green Parrot is your Southernmost Center
for Culture of every kind, and is located at the corner of Whitehead
and Southard Streets. For additional information call The Green
Parrot at 294-6133 or lookup www.greenparrot.com.